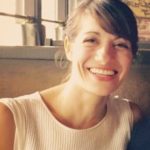 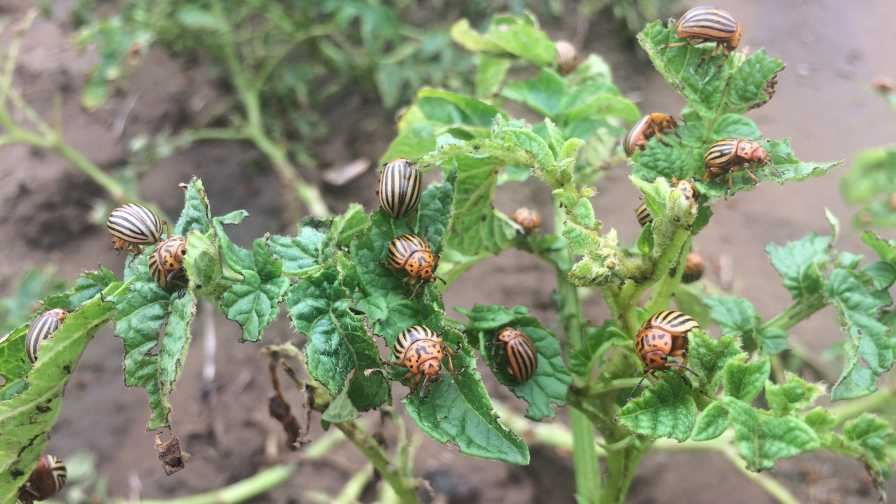 Adult Colorado potato beetles are swarming this plant.
Photo by Brian A. Nault

Scientific name: Leptinotarsa decemlineata
Common name: Colorado potato beetle
Geographical Range: The pest is found in the northern hemisphere. For a more detailed distribution map, visit Centre for Agriculture and Biosciences International’s (CABI) site.
Crops affected: Potato, tomato, and eggplant are the primary crops. Bessin adds that he has seen it on pepper, but this is a rare occurrence.

Nault: The Colorado potato beetle (CPB) continues to be a major potato pest throughout New York state as well as the Great Lakes region, Northeast, Midwest, Mid-Atlantic, and Pacific Northwest.

With respect to the economic impact, the following was pulled from CABI resource:

“One of the few examples in which losses due to L. decemlineata have been documented was in Michigan (Grafius, 1997). The cost of controlling L. decemlineata infestations in the Eastern U.S. averaged between $138 and $368 per hectare (Grafius, 1997). In 1994, Michigan potato growers spent $6.8 million to control L. decemlineata and still experienced losses in tuber yield, totaling $7.0 million, which together was nearly 14% of the overall crop value. Except for the Grafius 1997 study, there is a paucity of quantitative crop loss and financial loss information.”

Nearly all conventional potato growers apply an insecticide at planting followed by additional foliar applications of insecticides to manage the two to three generations of CPBs that infest their potato fields. Insecticide resistance is common, so control failures occur and may require additional applications of another insecticide. Adults and larvae both are voracious foliar feeders. Among the larvae, the last two instars consume the most foliage. 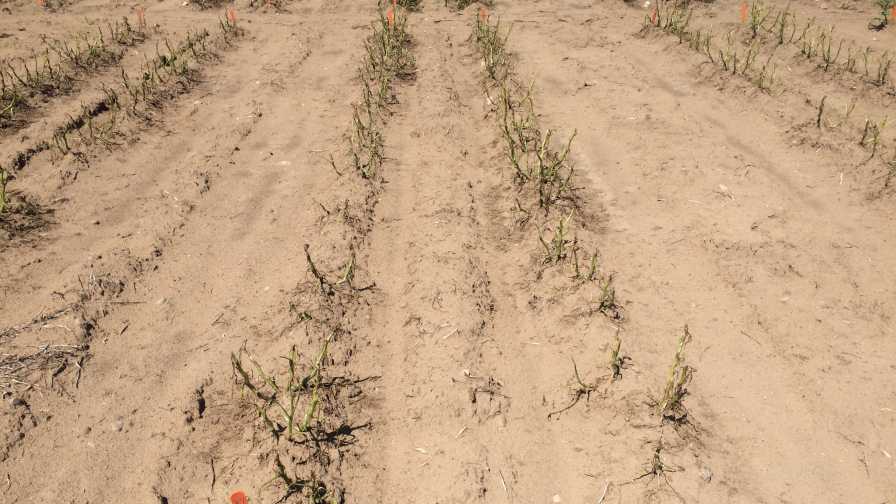 If you fail to control Colorado potato beetle, they can strip your crop of all its leaves.
Photo by Brian A. Nault

Bessin: The CPB is a U.S. native pest that has expanded its range throughout the Eastern U.S. and into other countries. It is a problem for vegetable growers. It impacts backyard growers as well as commercial producers, and it is a two-generation pest. If growers don’t manage the first generation, they will see major problems with the second generation.

The CPB is a serious pest because it has historically shown resistance to insecticides. It is one of the poster children for insecticide resistance. Growers are very fortunate to have many effective products, but at the same time, they need to use them judiciously so as not to promote resistance in the future.

With potatoes, it is an early season pest. Stems and leaves come out of the ground, and the beetle will feed on those. Adults do some damage, but the real problem is when they lay eggs. The larvae that emerge will eat all the leaves off plants if not controlled.

With tomato, it is also an early season pest. Some leaf loss occurs with the larvae. In a commercial setting, the pest can girdle the plants that are 18 inches or less. This is damage that’s caused by the adult. With eggplant, the pest eats the leaves off the small-to-medium-sized plants. Kentucky doesn’t grow a lot of eggplant, so this is less of an issue. Overall, if there are a lot of beetles, they will do a lot of damage. 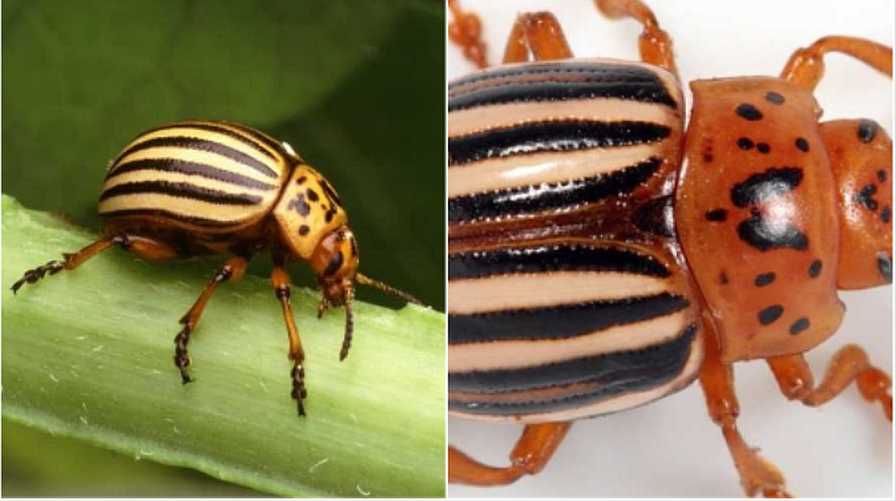 Nault: CPB is the principal foliar-feeding pest of potato. Adults are relatively large with bright orange, black, and cream markings. Larvae are brick red and black when young and turn a salmon to cream color when large.

Nault: Crop rotation of at least a half mile away from all previous potato, tomato, and eggplant fields is the best non-chemical method of CPB management. Unfortunately, this is not practical for many growers. Consequently, insecticides are considered the most effective treatment.

Neonicotinoid products (e.g., Cruiser Maxx, Platinum, Admire Pro, etc. [IRAC Mode of Action Group 4A-E]) have been used since 1995, but they are losing efficacy because of resistance.

It is always a good idea to consider other pests in potato fields (aphids and leafhoppers) before deciding what insecticide to apply. That’s because some will control multiple pests, whereas others do not. 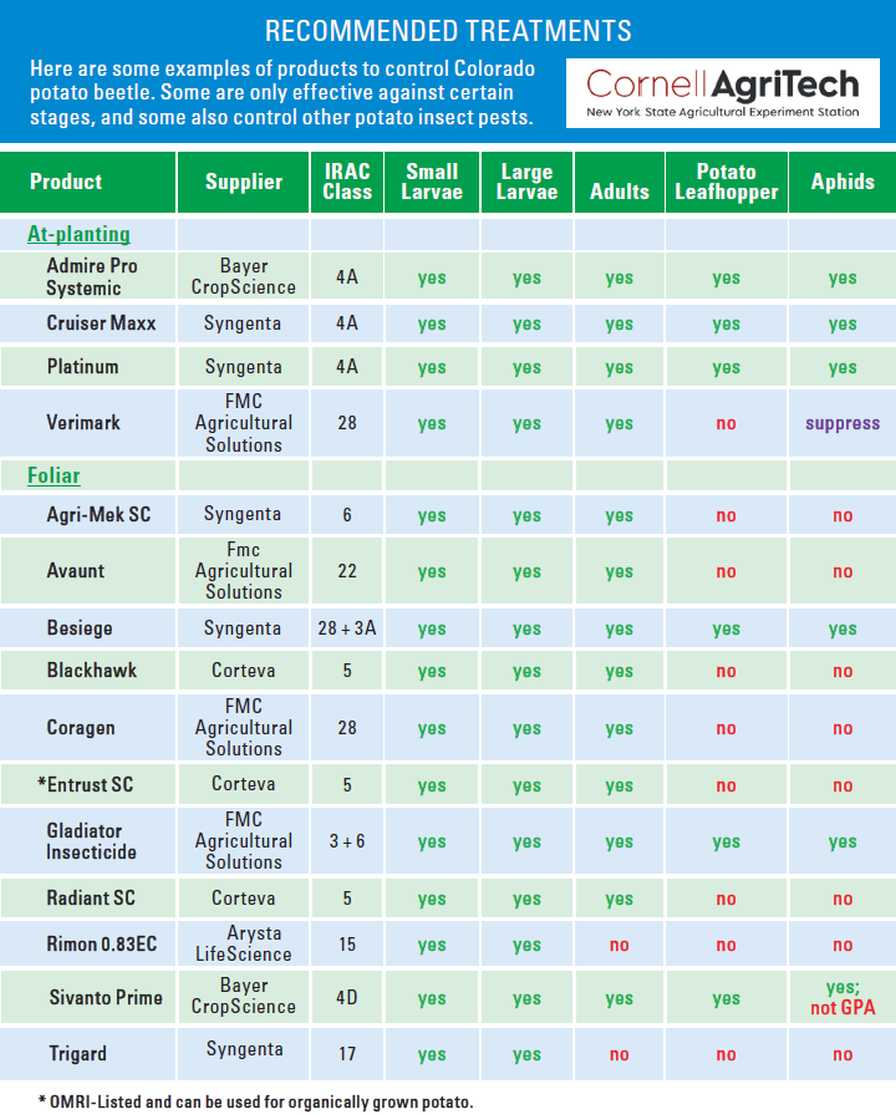 Elements to Consider in a CPB management program

Bessin: Growers need to scout for this pest on a weekly basis and keep records. There needs to be a standard procedure for how many plants are observed in how many fields. The numbers should be compared each week and written down. This will help to limit unnecessary pesticide applications, saving both time and money.

For IPM, growers should rotate fields. Avoid planting potatoes in the same spot that was used in the past. This is never a good thing for disease, weed, or CPB management. The pest will overwinter in the soil and come back to attack the same crops again next season.