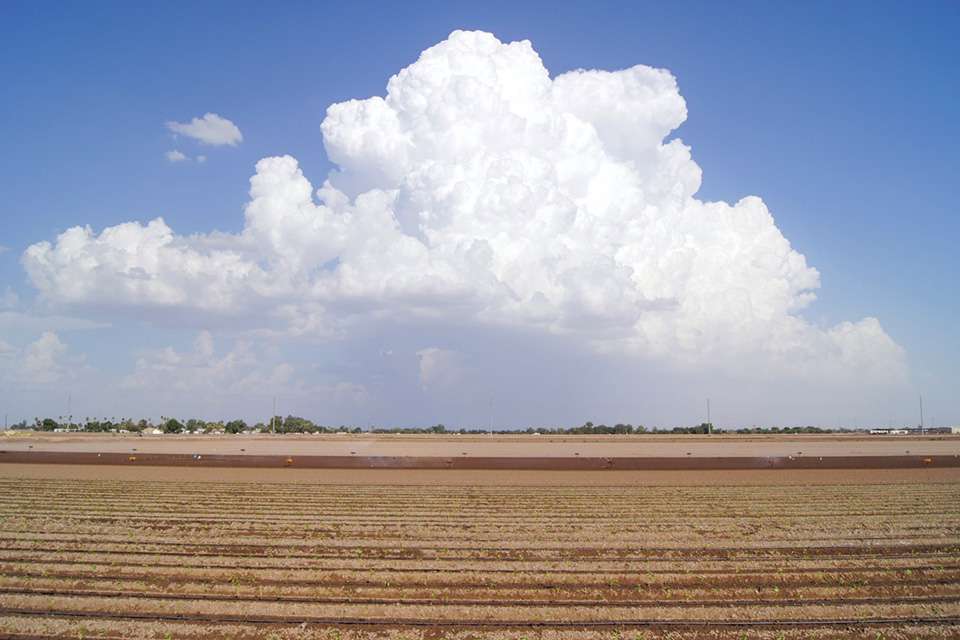 Local weather patterns can have a significant impact on the abundance of insect pests in vegetable crops. That’s particularly true in the southwestern U.S. where weather extremes are the norm.
Photo by John C. Palumbo

Components of weather — mainly temperature, moisture, and wind — can either promote insect population growth or cause populations to decline.

As we approach the hot and humid weather typical during the late summer and fall, growers can expect insect activity to increase. Why is that?

Temperature is the driving force behind insect development, physiological growth, and behavior.

Unlike many animals, insects are poikilothermic (“cold-blooded”). That is, they are unable to regulate their body temperature and their internal temperature varies along with that of the ambient environmental temperature.

In contrast, optimal temperatures for development among aphid species like green peach aphid (Myzus persicae) is around 55°F to 60°F. Under ideal weather conditions, aphids can complete a generation in as little as 10 days, which can be devastating to leafy vegetables, an important crop grown in the Southwest.

Temperatures similarly influence other biological and behavioral activities such as walking, flight, reproduction, feeding, and oviposition.

Crops Can Give Pests All the Water They Need

Many insect pests encountered in desert vegetable crops do not require free moisture to survive. They obtain water through their food supply.

For instance, Liriomyza leafminers spend their entire egg and larval stages inside melon or lettuce leaves, extracting water and nutrients from plant tissue.

However, relative humidity or lack thereof can influence insect growth and behavior by affecting the insect’s ability to regulate water loss. Low humidity often is detrimental to insect development. It can cause insects to become desiccated and die. However, most insects found in desert crops have adapted physiological and behavioral mechanisms to prevent dehydration.

Of course, rainfall can be quite deleterious to insects. The most striking example of this occurs following thunderstorms encountered in August and September, where heavy monsoon rains can cause significant mortality to whiteflies on melon crops and thrips on lettuce.

As a rule of thumb, insects find cool, wet extremes in weather the most detrimental. Why? Because they can promote disease, slow growth rates, and interrupt feeding activities.

Naturally, there are exceptions to the rule. One insect pest in particular, the seed corn maggot, thrives under these conditions. Melon crops are very susceptible to seed corn maggot during wet, cool spring weather, which slows seed germination. The maggots can attack the seeds before they emerge, causing significant stand loss.

Although wet winter conditions can be detrimental to the winter survival of many of our key insect pests, the extra moisture can also promote the growth of weeds and desert vegetation. This additional vegetation can provide a food source for insects such as aphids, thrips, and false chinch bugs. The insects can build up large numbers that eventually disperse on surrounding crops. 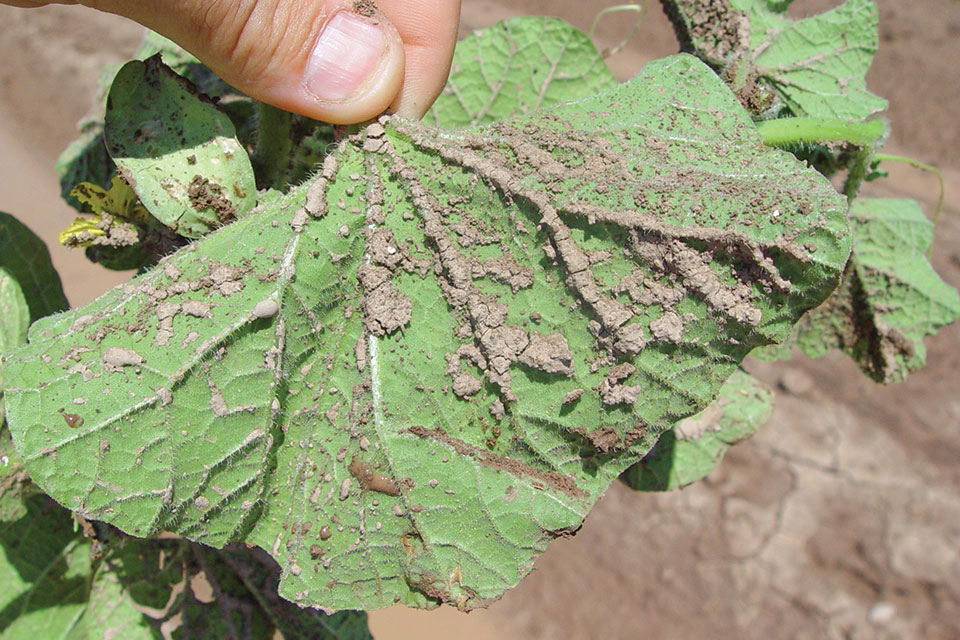 Following a thunderstorm, this cantaloupe leaf is covered with dead whitefly larvae suffocated from mud.
Photo by John C. Palumbo

Wind Acts as an Insect Interstate

Sweet potato whiteflies annually infest desert vegetables each fall after dispersing out of recently harvested cotton or melon crops. A light breeze can carry these tiny pests several miles downwind in a just a few hours.

Diamondback moths also are known to migrate hundreds of miles on wind currents, and this is largely how they infest desert cole crops each fall. Because cole crops and brassica weeds do not grow in the desert during the summer, diamondback moth populations can’t survive the long hot summers.

Rather, moths appear on crops in September as they are carried up from mainland and Baja, Mexico, on strong wind currents associated with monsoon and tropical storms.

There is no doubt that weather plays a major role in determining insect population abundance because of the direct and indirect impact it has on their biological development, behavior, and food supply. These interactions have been studied by entomologists for many years and are well understood. In many respects, predicting insect abundance in vegetable crops is like predicting the weather, but without satellite images.

John C. Palumbo is an Associate Research Scientist of vegetable crops at the University of Arizona’s Yuma Agricultural Extension Center. You can reach him at [email protected]. See all author stories here.

Berry Growers See the Upside of a Pandemic

Book Review: ‘Bloom’ Awakens the Weed Whacker in all of Us