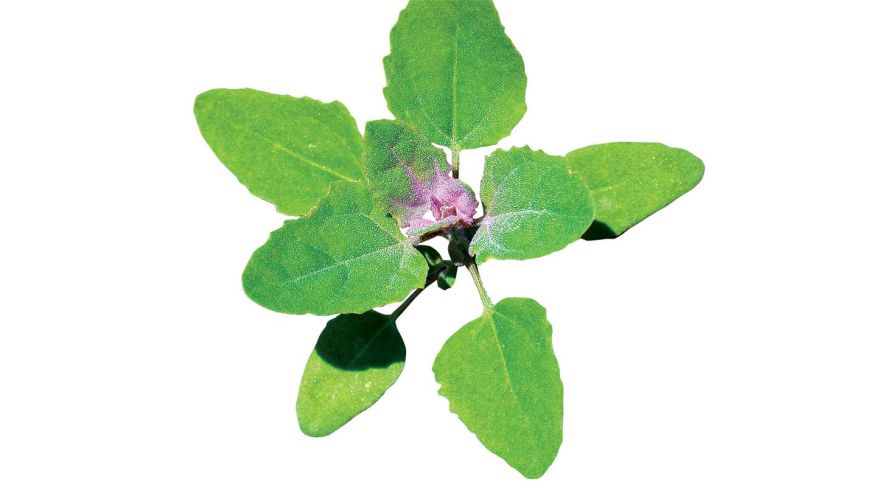 It would be difficult to find a weed more pervasive than Chenopodium album. It’s a summer weed that springs up about the same time crop seedlings do and lasts all season. It will thrive in any nitrogen-rich soil if left untended and is very competitive with vegetable crops.

Many parts of the world embrace its resilience — some cultures cultivate it as a leafy green vegetable. And it’s related to quinoa, which is grown for its seeds. But until you decide you want to cultivate this plant, here is a guide on managing it as a weed, compiled from tips shared by Bernard Zandstra (Michigan State University) and Douglas Doohan (The Ohio State University).

Another factor to its resilience is longevity. Half of the seeds produced survive 12 years. One study, states Michigan State University’s profile on the weed, showed 32% of seeds are still viable at 20 years.

Seed dormancy increases with its depth within the soil. Complicating matters, seeds on the same plant have differing dormancy requirements. A range of combinations of light, temperature fluctuations, and soil nitrate levels can trigger a plant to break dormancy. 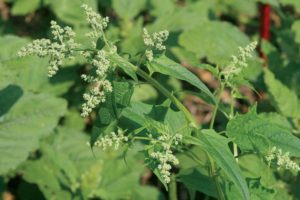 Other plants in the Amaranthaceae family can be confused with common lambsquarters. Shown here: Chenopodium hybridum. Photo by Hermann Schachner.

Lambsquarters is relatively distinctive in appearance, Doohan says. But you can be mistake for Atriplex, or other Chenopodiums (like the Chenopodium hybridum shown right), Zandstra says.

Another common, but more serious problem with correct identification is its name. Many call it pigweed, which can lead to applying an herbicide that is not effective.

“There is another large group of weed plants, the Amaranths, that is correctly referred to as pigweeds,” Doohan says.

The following management tips are given by Michigan State University’s sheet on C. album:

Tillage. Tilling at night (dark tillage) will reduce lambsquarters emergence by 30% to 70%.

Rotary hoeing. When common lambsquarters is less than ¼-inch tall, it is easily controlled with a rotary hoe.

Flaming. At heights of ½ inch or less, flaming is an effective way to control common lambsquarters.

Planting date. Tilling in the spring and planting later (mid-May) will reduce lambsquarters infestations because many of the plants will have emerged and been controlled by tillage.

“[Common lambsquarters] is generally well controlled with cultivation and with the herbicides that vegetable farmers can use,” says Douglas Doohan, a Professor at The Ohio State University.

Herbicide Treatment. There are a lot of different herbicides that effectively control Amaranthaceae album. Some common lambsquarters seeds have shown resistance to triazine herbicides.

“Atrazine (used in corn), simazine (used in fruit), and metribuzin (used in tomato) can become a problem if the farmer does not remove such plants through physical means,” Doohan says. “It is primarily a problem during the crop establishment period (first several weeks) if not controlled.”

All three herbicides, Doohan says, the weed shows resistance to are photosynthesis inhibitors and fall into WSSA Group 5.

“For organic production, stale seed bed techniques are used to reduce the number of seed, vegetables, and berry plants are seeded/transplanted into strips of opaque plastic mulch that prevent weed establishment, straw maybe used as an organic/biodegradable mulch and of course cultivation and weeding by hand. Cover crops and crop rotation also can be used to reduce incidence of lambsquarters and other weeds,” Doohan says.

Relative of Citrus Greening Bacteria Mutating Into a New Threat