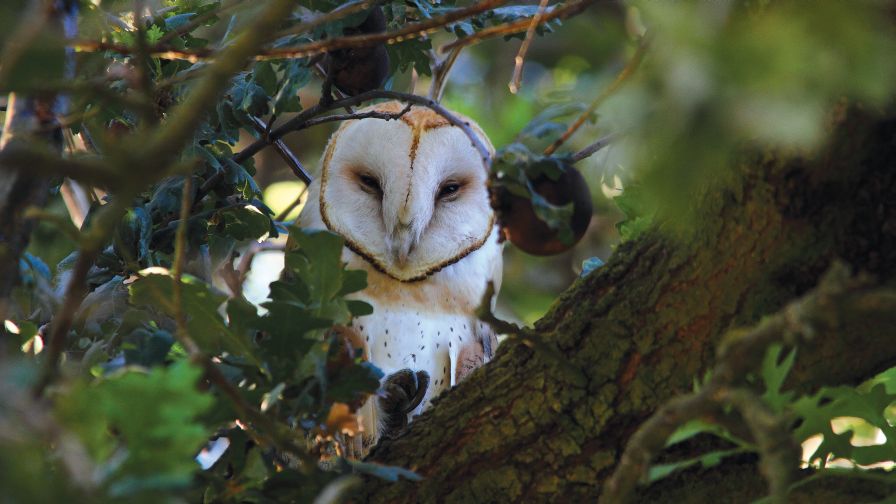 Wildlife pests are an inevitable challenge for any operation. In addition to traditional management methods — repellents, deterrents, and fences — recent research suggests raptors are an effective option for growers.

The researcher checking into using barn owls as a natural form of vertebrate pest control, Sara Kross, Assistant Professor at the University of California, Davis’ Department of Wildlife, Fish and Conservation Biology, conducted her studies in California’s Central Valley.

Kross focused on barn owls because they have a wide range of habitats, are capable of nesting in areas with humans, and are a top predator of vertebrate species.

“Most other birds of prey have large territories that would make it much harder to utilize them for pest control. However, you can put barn owl boxes out at high densities and see quite a few boxes being used,” Kross says.

Since owls already performed well in orchards and vineyards, she wanted to examine barn owl diet and nest occupancy in other intensive agricultural landscapes — including vegetable crops. She divided the experiment between annual and perennial crops, and the annual crops studied included tomatoes, squash, sweet corn, and peppers.

Her research revealed that more than 99.5% of prey items in barn owl diet were agricultural pests, and that the diets of owls changed depending on the dominant crop types around them.

“For example, they ate more gophers if they were near vineyards and orchards,” Kross says.

How Growers Can Attract Owls

Because barn owl habitats have declined in some agricultural regions, growers in her study used artificial nest boxes to attract the birds to their land. Boxes were constructed out of wood, metal drums, PVC pipes, and polyurethane.

According to Kross, you can find simple box designs online on The Audubon Society and USDA websites. If growers want to purchase boxes, they can be found on Amazon for approximately $100.

Kross says that you should place boxes on posts or on trees to be out of range of other predators. And it’s critical that the entrance be small enough so no other predators can come in. She also suggests that you space the boxes evenly along the perimeter of the field, and increasing in scale according to acreage to increase populations.

Box occupancy in the study reached 60%, Kross says, and the birds were most active during the months of May to August, after the chicks had hatched and left their nests in search of prey.

After collecting 434 owl pellets under 33 different nest boxes, Kross discovered that mice, voles, and pocket gophers represented the majority of owls’ prey. Birds and other small prey also were discovered in the pellets, but in much less significant numbers.

“Growers were able to see the pellets and break them apart underneath the barn owl boxes. They could see all of the different jawbones of the different rodents they ate, and this way they knew they are providing a service to them,” Kross says.

One of the most important things for growers to note is that owls can suffer from secondary poisoning if they eat rodents that have ingested rat poison, Kross explains.

“If a rat or rodent has consumed rodenticide, they could be running around with a really high load inside them, and they don’t die right away. If a barn owl catches one in that state, they can get a really high dose, and it can kill them,” she says.

For growers seeking to use both owls and rodenticide as controls, Kross suggests not using rodenticide during the owl breeding season, and in general, using the chemical in a very targeted way to avoid secondary poisoning.

Overall, Kross sees a lot of promise for the use of raptor species as pest control in the future.

“Using a natural form of pest control like this usually doesn’t have a downside. Growers can benefit from it, and it’s really amazing to see the owls flying out across their field at night — knowing that they’re out there working for you.”

For her PhD studies, Kross re-introduced falcons into a vineyard growing region in New Zealand and discovered that there was a 70% reduction in grape damage when the falcons were present. This is due to what Kross says ecologists call the “landscape of fear.”

“We found that re-introducing them into the vineyards reduced the presence of four [bird] pest species, three of which were introduced European birds. The falcons weren’t eating them all, it was just their presence that caused a change in the behavior of the bird. The pest birds were going elsewhere, or they were less brazen in their foraging tactics,” she explains.

She says that although not yet proven, the same thing may likely happen with the owls present.

“For growers this results in less damage because the pests are more cautious and stay in their burrows because they know there are predators there.”

If you have a high-value crop and are suffering significant damage from bird pests, Kross mentions the possibility of hiring a professional falconer to help control them.

She also mentions introducing the American Kestrel, a small common falcon, as a possible option for managing small bird pests.

“They are not big raptors, but they will chase small birds. They are cavity nesters similar to owls, and growers can put up boxes if there are Kestrels in the area and they may get them to nest in those boxes,” she says.

4 4 5 ICYMI: Barn Owls Can be an Effective Control for Rodents and Gophers

Is a Lettuce Shortage on Its Way for the U.S.?

And Now To Give Thanks for the Produce Industry