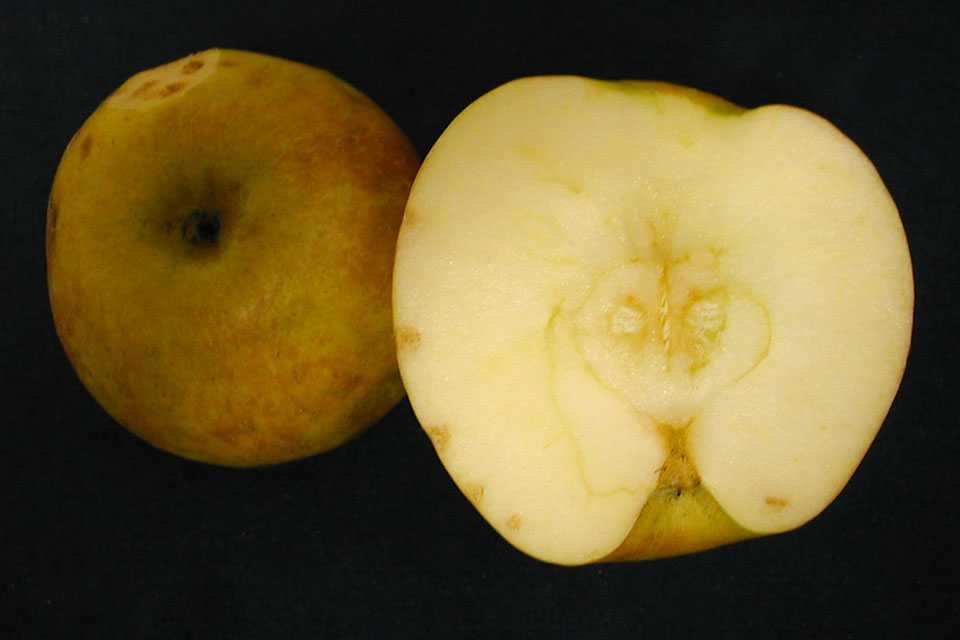 Bitter pit disorder symptoms on and in ‘Honeycrisp’ apples.
Photo by Randolf Beaudry

Bitter pit can be a troublesome issue, especially for ‘Honeycrisp’ apple growers. The disorder is characterized by dark spots on the fruit’s skin or in the flesh and believed to occur from a calcium deficiency.

Dr. Todd Einhorn, Associate Professor, Michigan State University, says the problem comes down to water flow. When xylem vascular tissues in the fruit, which carry water and minerals up from the soil, undergo significant strain early in the growing season, cells can rupture, causing this tissue to become dysfunctional. This leaves the phloem to supply most of the water to fruit as the season progresses toward harvest. However, calcium is not mobile in the phloem.

“ABA closes the stomata, the pores in the epidermis of the plant’s leaves,” Einhorn says. “The idea is if you can reduce the amount of water and nutrients going to the leaves, you can potentially increase nutrient delivery to the fruit.”

Einhorn and his team, including graduate student Tye Wittenbach, tested this hypothesis on ‘Honeycrisp’ apples over two years (2018 and 2019), applying different rates of ABA every 10 days (about the time it takes for the plant to metabolize) at different periods during the season to thinned and unthinned trees. While fruit thinning is required to reduce the crop load, improve fruit quality, and return bloom of ‘Honeycrisp’, over-thinning results in large fruit with diluted calcium concentration and, generally, higher bitter pit incidence. In other tests they evaluated the role of ABA as a fruitlet thinner. He also measured plant gas exchange after each application to determine ABA uptake and mode of action.

“We saw a very nice rate response in reducing stomatal conductance (water use) with ABA use,” he says. “The consequence of reducing transpiration, however, is a similar reduction in photosynthesis. You’re essentially setting up a carbohydrate deficit, which is the basis for the early season application of ABA to thin apples.” 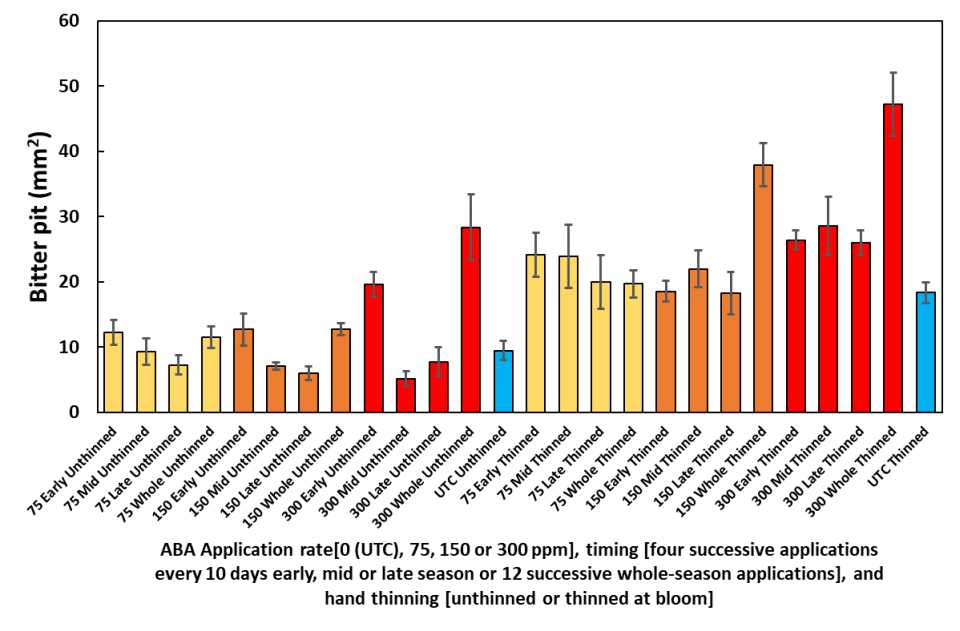 Todd Einhorn’s team studied bitter pit occurrence in relation to abscisic acid application and whether apples were thinned or unthinned at bloom.

However, the levels of calcium, potassium, magnesium, and other nutrients in the apple flesh and peel tissues (measured by Dr. Lee Kalcsits, Washington State University) showed no clear relationship with ABA treatments. Calcium, in general, was very high despite no foliar applications of ABA. Low rates of ABA tended to increase calcium, but surprisingly high rates reduced it while increasing the ratio of potassium and magnesium to calcium. There was slightly more calcium in the stem end of the flesh compared with the calyx end, which would support why growers generally see more of the disorder on the calyx.

“Thinning slightly increased the ratio of potassium and magnesium to calcium, so we expected thinning would have increased bitter pit, which it did,” he says. “These cations can compete with calcium and thus limit the concentration of calcium in fruit tissues.”

Dr. Lailiang Cheng, Cornell University, has demonstrated the adverse effects of over applying potassium fertilizer on bitter pit incidence. His recommendations have resulted in marked improvements in the severity of bitter pit over the past several years.

Einhorn also ran all the apples over an experimental Compac sorting line to characterize bitter pit by calibrating the number of pixels per fruit with manual measures of the actual disorder present on a fruit’s surface. “It was a very clean relationship overall, but we found some noise,” he says.

While there were no significant ABA effects on bitter pit, the incidence of the disorder was extremely low, only about 5%. Einhorn’s team performed the same work in 2019 and had similar results, with even lower levels of bitter pit.

“It was unfortunate for our study but fortunate for growers,” he says. “That’s ultimately what we want to see, though we need strategies to deal with high bitter pit years.” 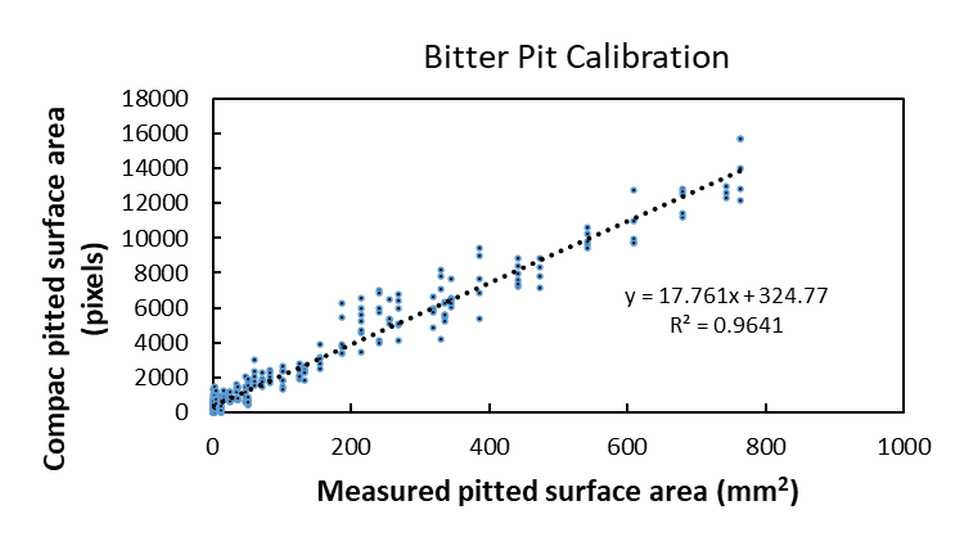 Further into the 2020 growing season, Einhorn looked at xylem functionality by immersing pedicels of fruit in dye and evaluating the staining of apple vascular bundles. He observed that the primary bundles that supply nutrients to the cortex and are located on the apple’s core line were about 50% dysfunctional at the midpoint of the season. Meanwhile, dorsal bundles that supply nutrients to developing seeds and are located at the tip of seed cavities had also declined to about 80% functionality at the same point.

Einhorn concluded that ABA applications had only resulted in slight improvements in xylem function and, therefore, despite the positive effect on limiting transpiration, had no appreciable effect on calcium content in the fruit or a reduction in bitter pit.

Still, Einhorn and his team are intrigued by ABA and would love to continue their research to learn more.

“We’d like to see if we can reproduce the positive benefits of ABA shown in other studies in a high bitter pit year.”

Kathie Taylor is a regular contributor to American Fruit Grower and Western Fruit Grower magazines on a variety of subjects from crops to production. She is a freelance writer residing in Parma, OH. See all author stories here.