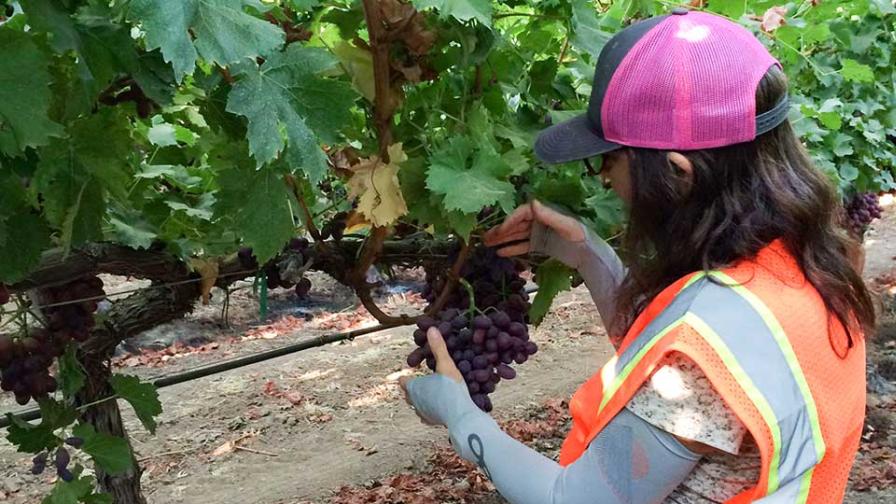 Vine mealybug (VMB) is vineyard enemy No. 1 among insects, in part because of its versatility as a pest. It is equally impactful from a disease standpoint.

“Vineyards in the Western U.S. face a growing threat from VMB,” Sara Goldman, Technical Support Manager with Suterra, says. “It’s a serious threat because it not only damages fruit by feeding but also spreads grape leafroll viruses, which cause disease that can destroy otherwise healthy vines.”

The insect feeds on the sap of grapevines and produces a sticky residue, or honeydew, that contaminates clusters with mold and degrades the value of the crop. Studies suggest that honeydew residue also reduces quality in wine production, Goldman says.

“Vine mealybug is the most aggressive of the mealybugs that attack grapes. VMB has more generations, produces more honeydew, and is the only mealybug that will spread to all plant parts, from roots to upper canopy leaves,” Goldman says.

Few chemical management options are available, according to Goldman, and the more they are used, the greater likelihood that insecticide resistance will develop, she says.

Worse yet, according to UPL Technical Service Manager Emily Smith, regulations are limiting the amount of pesticide that growers can apply to a crop.

Fortunately, pheromone mating disruption, ant control, and beneficial predators are all integrated pest management (IPM) options that improve the outlook for VMB management without the risk of resistance, Goldman says.

Growers often do not realize, Goldman says, that female and immature crawler VMB are wingless, and it is during these non-flying life stages when infestation often spreads through a vineyard and between vineyards. In turn, there are several ways the wingless stages spread, including one of the more common: farm equipment.

“Do not allow contaminated equipment, vines, grapes, or winery waste near uninfested vineyards,” Goldman says. “Mealybug crawlers can even hitch a ride on field crews that have been working in an infested vineyard or with prunings and plant residue from the previous season. They can also be dispersed by birds and other wildlife, surprising even the most meticulous growers.”

Consistent monitoring for mealybug through field scouting and trapping is essential, even for vineyard managers who don’t think they have a problem, Goldman says. “Now is the time to begin monitoring VMB with traps to verify when male flight activity begins,” she says.

According to Smith, growers also tend to overlook work that can be done postharvest. “As soon as the grapes are off the vine, it’s easy to push off any lingering disease or pest issues until the next season,” she says. “I would recommend focusing on crop protection while vines are dormant. This is a great time period to tackle any pest or disease issues, such as the vine mealybug or powdery mildew. Also, economic concerns play a role. The grape market is low right now, and growers are trying to get by with what they can. It’s going to become even more important to choose the right products to handle these issues in and out of season. Grape growers will need to make every application count.”

Bayer Crop Science: Movento insecticide has a two-way systemic action that results in broad-spectrum control. It is effective against all stages of the mealybug lifecycle and is recommended in programs with other insecticides, such as Admire Pro Systemic Protectant.

Sym-Agro: Cinnerate is a cinnamon oil-based fungicide/insecticide that provides a high degree of knock-down efficacy and is very safe on predators, President/CEO Peter Bierma says.