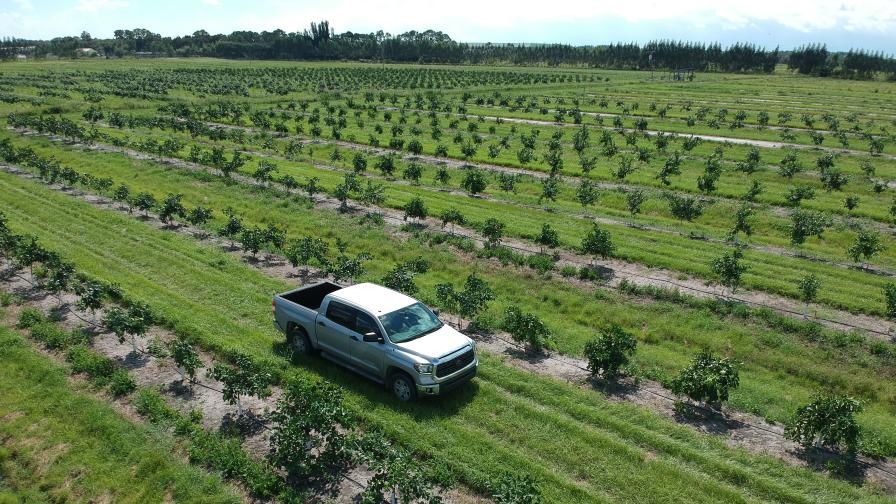 Here’s a bird’s eye view of the Millennium Block in Ft. Pierce, FL, where key citrus research findings are ready to be harvested.
Photo courtesy of UF/IFAS

University of Florida’s Indian River Research and Education Center (IRREC) is slated to host a field day in a large-scale research trial for growers and other citrus industry stakeholders to see firsthand. The IRREC Millennium Block Variety Trial Field Day event will be held from 9 a.m. to noon on Oct. 19 in Ft. Pierce.

The experimental grove was established in 2019 in response to a decline in Florida’s fruit production due to citrus greening. New rootstocks combined with tree scions are widely believed to identify combinations that will tolerate the disease, according to Ron Cave, IRREC Center Director.

“Citrus growers from all of the state’s important regions can benefit from the findings that are now visible in the rootstock variety trials in IRREC’s Millennium Block,” Cave says. “The harvest this fall and winter will be the first for the four trials, and by late January, we should have the first data to share with growers.”

The Millennium Block is a trial to determine which scion and rootstock combinations can better adapt to the Indian River’s Flatwoods soils and tolerate citrus canker and citrus greening while producing profitable crops. Cave leads the 20-acre citrus grove research program at the research center. As part of his work to oversee the center’s citrus research program, Cave supervises Tom James, a biological scientist who manages the trial grove.

James says the grove features more than 5,500 2- and 3-year-old trees. A total of 154 new citrus scion-rootstock combinations are the trees included in the active research project. Many trees bear fruit that will be harvested later this fall.

“We have a grapefruit scion trial with 18 selections on three commercial rootstocks and three independent rootstock trials with ‘Ray Ruby’ grapefruit, ‘Glenn 56-11’ navel orange, and ‘UF 950’ mandarin as scions,” he says.

Each experimental plot is identified by a code tag and replicated six times across the trial.

“The strategy that offers the most hope for Florida growers to keep citrus groves productive in the current citrus greening era is tree variety improvement,” Cave adds.

Castle and local grower Peter Spyke contributed to citrus variety selection for the project, along with Indian River Citrus League board members and the USHRL director and researchers.

“We are testing a wide variety of grapefruit scions and rootstocks available,” Cave adds. “And early next year, we will provide growers with the first yield data from the experiment, and that’s key to science-based decisions that will help growers sustain the work they love.”

For those interested in attending the field day, register at eventbrite.com/field-day-tickets. To register by email or telephone, call Tom James at 772-468-3922 or email: [email protected].

Want To Grow Something Alternative? Asian Vegetables Are in High Demand