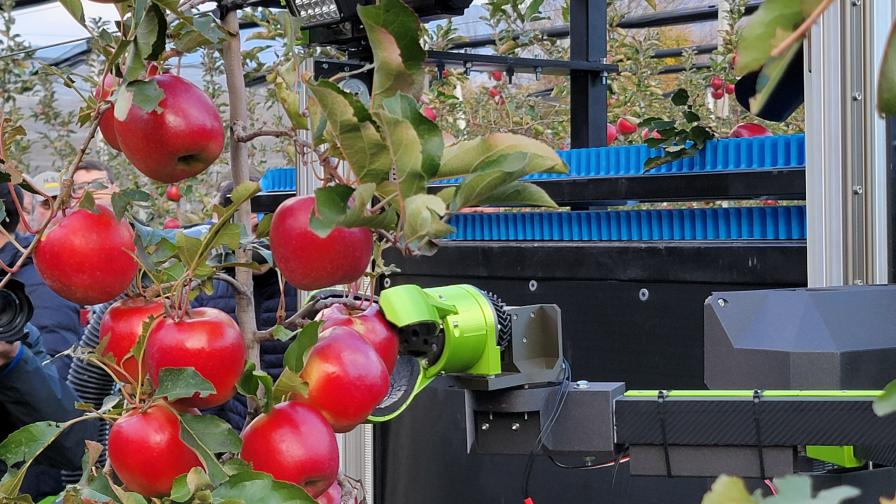 A machine built by an Italian company, Aigritec Sri, picks ‘Joya’ apples in the orchards at the Laimburg Research Center in South Tyrol, Italy. It’s an example of the advanced robotics seen at this year’s Interpoma event.
Photo by David Eddy At Italy’s Interpoma, in Bolzano near the German border, there was tremendous interest in robotics, perhaps because European apple growers have dealt with labor shortages both earlier and more acutely than their U.S. counterparts.

The area, South Tyrol, is Europe’s largest apple-growing region, with a total of more than 45,000 acres. No wonder it attracted the attention of the International Fruit Tree Association, where members visited on a mid-November tour. Interpoma featured two half-day congresses, one on robotics and the other, interestingly, on the dynamics of the U.S. apple industry. The latter featured two academics, Susan Brown of Cornell University and Stefano Musacchi of Washington State University, and one grower, Tim Welsh, of Washington’s Columbia Orchard Management.

As might be expected, it was the robots that were of keenest interest to most American growers on hand. Seven robotics companies from all over the world were invited to present PowerPoint explanations of their companies, with the more advanced companies supplying videos. Such videos generated a lot of excitement when first screened nearly a decade ago, so much so that many growers have become disappointed in the pace of development.

On point, the first company presentation, by American company Advanced.farm, was titled “Moving past the promo videos to build a 21st century agriculture company.” Interpoma organizers pulled no punches, noting the bankruptcy a couple years ago of the robotics company that seemed the furthest along in automating the entire apple-harvesting process, Abundant Robotics. Read More
The Top Pumpkin and Squash Varieties for Growers

The road to automation has been a long one. The Washington State Fruit Research Commission was founded more than 50 years ago with an eye to automating harvest.

“If it was easy, it would have been done by now,” Advanced.farm’s Peter Ferguson says.

Advanced.farm appears to be among the presenting companies furthest along in commercializing the process. Their robots picked 80,000 apples in Washington this past year. 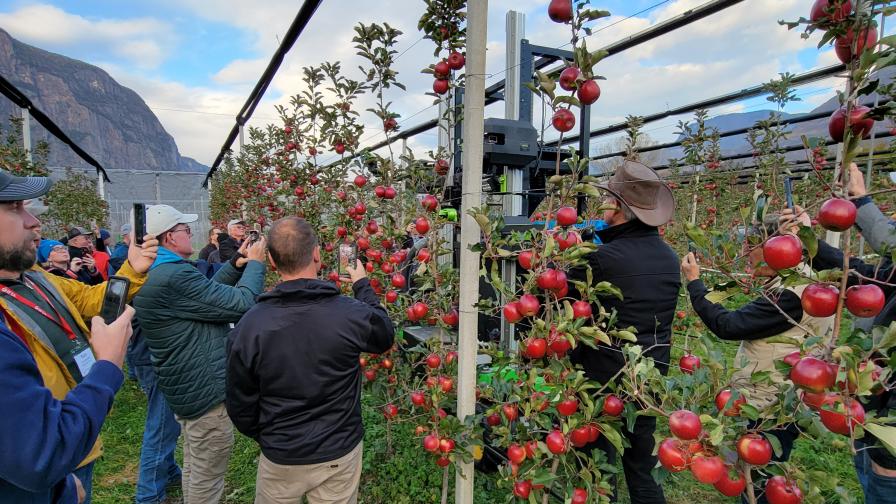 Growers on the IFTA tour couldn’t get their smartphones out fast enough to record the action.
Photo by David Eddy

One asset that companies have today is the increasing pull from growers. Labor costs are a huge expense and getting bigger, but an even greater worry is that there simply won’t be the necessary people available in just a few years. The consensus among growers at Interpoma: Robots will be commercially available in three years.

Ferguson says the advantages are huge, with only one person needed to monitor several robotic picking machines, which aren’t limited to one shift of picking. Not that big challenges don’t loom in such an industry.

“One of the hard things about farming is you only get one chance a year to get it right,” he says.

Created by Meister Media Worldwide, the Global Ag Tech Initiative offers a portfolio of events and informative products to forward ag tech development and adoption globally to improve agricultural practices to better feed the world. You can learn more at GlobalAgTechInitiative.com.