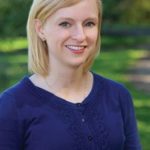 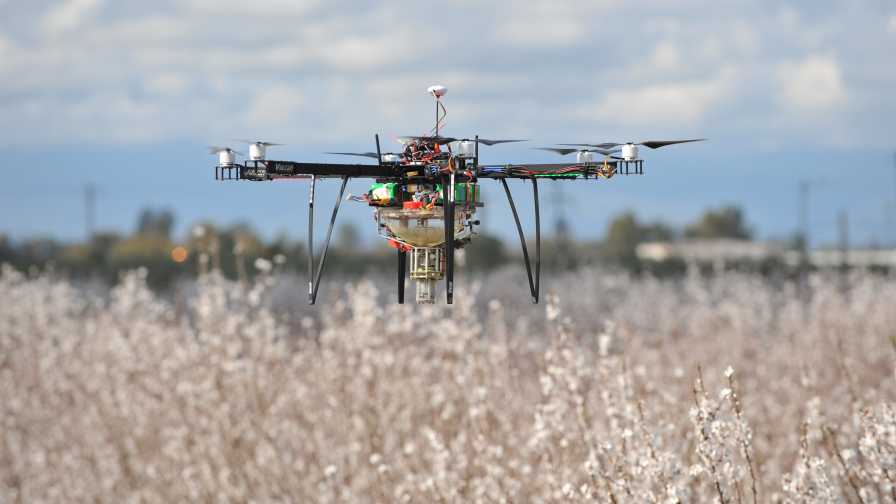 A hexacopter hovers in flight over a blooming fruit orchard in California’s Sacramento Valley.
Photo courtesy of Dropcopter

Imagine this: Your trees are in full bloom, but it’s a cool spring day and the bees you’ve brought in don’t seem to show signs of movement from their sleepy hives.

You know timing is critical, so what do you do to ensure your crop gets pollinated?

There’s a promising new technology using drones to disperse collected pollen. A Syracuse, NY-based startup called Dropcopter has been using hexacopters successfully in a handful of crops, including almond, apple, cherry, and pear. In three years of trials, using drone-augmented pollination increased yields by 25% to 50%.

How Do They Get the Pollen?

Pollen, of course, is the key element to the Dropcopter approach. Since bees help transport pollen from blossom to blossom, it begs the question, how and where do they get pollen to apply?

“One of the primary things that we have to do before identifying that we’re going to be able to work on a given crop is figure out how we’re going to gather the pollen in order to get that job done,” Mike Winch, Chief Marketing Officer at Dropcopter, says. “In some cases, that’s much more difficult than others.”

The pollen for almonds is harvested using a novel approach – the same tree shaker that is used to harvest the nuts can be employed in the spring to harvest pollen. The tree is shaken when it’s in bloom to release some of the flowers, and then the pollen in those flowers are extracted and purified.

For other crops, the buds are actually hand harvested before opening and the pollen is then extracted.

“The pollen goes through a purification process, which has a couple of advantages, especially for crops like pears that actually can have disease spread between trees by pollen,” Winch says.

Not many trees are needed in order to harvest enough pollen for the entire orchard.

“We can gather pollen at 100 times the rate that we need to,” he says.

And the few trees that are used to harvest pollen still have blossoms on them.

“The blossoms that stay on the tree through that process are still very much viable and very much able to be pollinated,” he says. “So it’s not like you are decreasing the capacity of your orchard by having them shaken.” 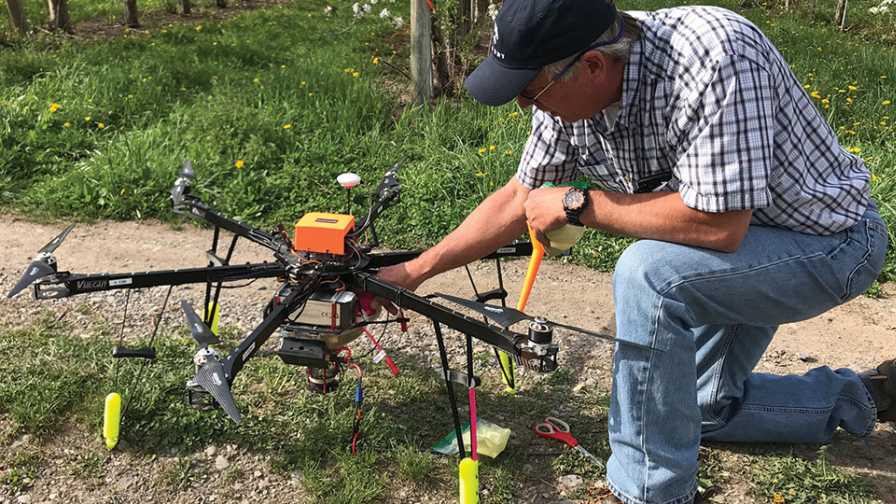 Dropcopter CEO Matt Koball changes one of the two batteries in one of the company’s drones. They can fly 20 to 30 minutes on a charge at the present time, depending on conditions.
Photo courtesy of Dropcopter

Flight of the Drone

The drone flies as it does for imaging – it follows a predetermined set flight plan, has a controller, etc. But, you can customize the speed the drone pollinates to achieve certain parameters.

The pollen itself is contained in a patented device that disperses the pollen from the drone. Dropcopter has one of a handful of licenses to drop dry materials from a drone aircraft.

“It is capable of distributing pollen at a specific rate across a specific swath so we can control how wide an area we cover.,” he says. “In essence, think of it as kind of a flying fertilizer spreader.”

Drones fly up and down the rows about 10 feet above the tree canopy and can cover about 20 to 25 acres an hour and flights generally run about 25 minutes.

“We follow the terrain, the slope of the land so that if you have planted on land that is up and down on hills, we’re capable of following that automatically,” Winch says.

It’s all about the Pollination

The approach to pollination for each crop is a bit different. The Dropcopter team has worked in almonds, apples, cherries, and pears..

Last year, Beak & Skiff Orchard in Lafayette, NY, was the first commercial apple orchard to be pollinated using Dropcopter’s drone. The team pollinated about 300 trees in that first trial.

What makes the drone so interesting is its ability to pollinate an apple orchard in less than ideal conditions for bees, especially in the Eastern part of the country. And, Winch says drone pollination can be used to help set size and avoid thinning costs later.

“If you use bees, they’ll pollinate the king blooms today and then in the next couple of days as the other blossoms come out and they will pollinate those as well,” he says. “You wind up having to deploy a lot of

workers out into your orchard in an extensive thinning process that probably runs you about $500 an acre to accomplish.”

But with a drone, “you can be a little more discriminating about how you deploy augmented pollen,” he says. The drone can pollinate the king blooms and then barriers can be put on to prevent pollination for the rest of the blossoms.

Another advantage is that drones can fly in less ideal conditions.

“One of our strengths is that we can be pretty agile around deployments,” he says.

Winch says a third-party independent study found a 30% increase in value per acre with the use of drone-augmented pollination.

From the Grower’s Mouth

Almond grower Kevin Hebrew was one of the first growers to work with the Dropcopter team on his farm. He’s used the drone to supplement bee pollination in five acres of his ‘Nonpareil’ orchard.

Hebrew says he’s satisfied with the uniformity of coverage.

“It is really simple. They just show up, set the drone on a landing area, and program in your orchard and load your flight plan,” he says. “They load the pollen into the copter and take off flying. It’s really quick.”

Hebrew does say there are some restrictions to flying a drone based on wind speed, but the drone can cover the crop even in a a shortened period of good conditions, such as this past spring when the weather was less than ideal at bloom.

“If you have a small window, the drone can make do with that,” he says.

Hebrew estimates a cost of anywhere around $200 to $245 a hive, and as the cost of hives increases and availability continues to decrease, drone pollination is a great alternative.

“You can fly the copter with a limited [number] of bees or a full complement of bees,” he says. “It’s a really good-looking avenue for additional pollination that can be relied on.”

Hebrew says he compared pounds per tree between his orchard with drone-augmented pollen and traditional pollinated orchards, and there was a noticeable difference between the yields of the orchards that used the drones.

“There’s really something to it,” he says. “I’m pretty excited with the technology.” 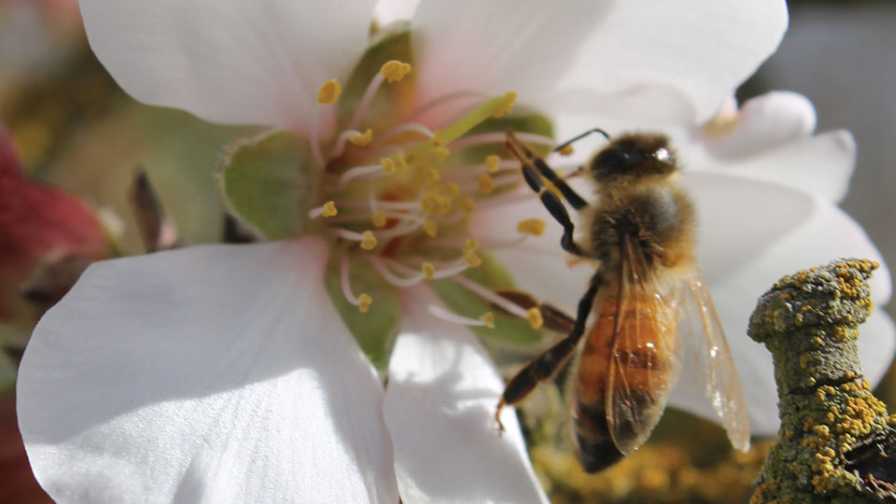 Pollination is especially challenging when it comes to almonds, says Dropcopter Founder/CEO Matt Koball. There are more than 1 million bearing acres in California, more than three times the total of U.S. apple acreage, and they are the first to be pollinated, about mid-February. Incidentally, Koball comes from a background in farm labor contracting and orchard management, so he’s very much aware of grower challenges — and opportunities.

“Almonds are one of the first crops to bloom in California, and weather can be a huge issue as most of the growers know after going through last year’s rain-soaked bloom,” he says. “Bees experience the same environmental conditions we work in, but we don’t stay home if the temperature drops below 55 degrees.”

However, using drones in such conditions is not easy, says Koball.

“Dodging rain and high winds present challenges out in the field. As most almonds are not presently topped at this time, controlling aircraft height due to the uneven height of trees creates more challenges,” he says. “Most other crops we work with are topped or hand-pruned to a consistent height.”

“As bee availability becomes more scarce, more expensive, and as acreage increases, growers need help in assuring that they have every opportunity to set nuts on the tree,” he says. “Almond growers are some of the most innovative tree crop professionals in the state, and are very accepting of new technology.”