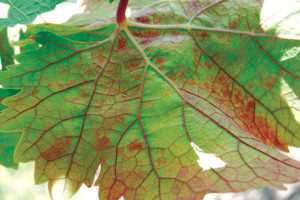 Winegrape growers in California, as well as other scattered locations across the country, are seeing red in their normally green foliage, and they want to know why. Many assume their problem is the latest disease to be identified, red blotch.

But they shouldn’t jump to conclusions, warns Andy Walker of the University of California-Davis Department of Viticulture and Enology. Walker addressed an audience of growers, Extension advisors, and other industry players at a mid-May seminar on the UC-Davis campus titled: “An In-Depth Look At Red Leaf Viruses.”

“We don’t even know if they are viruses or not,” he said.

Diagnosing such maladies is incredibly complicated, noted just about every speaker. Maher Al Rwahnih, a scientist at Foundation Plant Services at UC-Davis, noted that so far, 63 viruses have been found in grapevines.

“Fortunately not all of them cause problems,” he added. 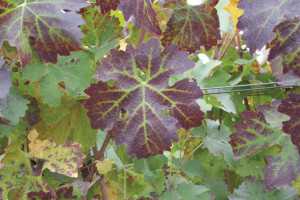 Quick History
The director of Foundation Plant Services, Deborah Golino, gave the audience an overview of the history of leaf diseases. She, too, noted that there is a lot that’s unknown about the diseases, and a lot that’s supposedly known, but has since been debunked. For example, it wasn’t until 1987 that it was discovered that mealybug transmitted leafroll.

“I arrived that year at UC-Davis, and like everyone else, I thought it was transmitted in the field,” she said.

Speaking of leafroll, she said that with all the concerns about red blotch, many in the industry are forgetting about all the other viruses.

“A red leaf is a hint, it’s not a diagnosis,” she said. “It’s a hint you might have a viral disease.”

Golino said she has heard many people say that red blotch is worse than leafroll.

“I just don’t think that’s true,” she said, adding, “we don’t have enough data yet on red blotch and yield.”

Complicating matters further, Golino said that diagnosticians usually don’t find just a single virus in a vine with red leaves, but a “cocktail” of viruses.

“Multiple viruses is the common denominator of vines we test at Foundation Plant Services,” she said. “Whether from Europe, Australia, wherever, multiple viruses is much more common than single virus infections.”

Golino was asked what other countries are doing about red blotch.

“They are studiously not looking for it,” she said, drawing a laugh from the audience. She added that Australia is using red blotch as a trade barrier, and her counterparts in Europe are “remarkably mute on the topic.” 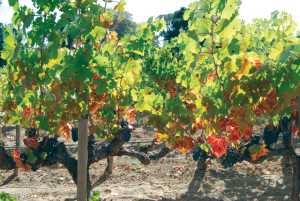 Sourcing Vines
The Foundation for Plant Services tests a lot of vines — “I can’t tell you many boxes of latex gloves we go through each month” — including vines from all around the world. Golino was asked if any of those vines have tested positive for red blotch, and she responded “All the time.”

“I think it co-evolved with vitis vinifera,” she said. “It would be great fun to go test some isolated 100-year-old vineyards.”

Growers who want to avoid the virus should start with clean vines and stay clean. The good news is that Russell Ranch, from which virtually every nursery the state sources vines, is 100% free of red blotch, she said. They plan to keep it that way through constant testing and by not bringing in any equipment from other vineyards, using separate tractors and tools. They have an advantage in that Russell Ranch is isolated from other vineyards. They convinced the few neighbors they do have with any vines to pull them out. 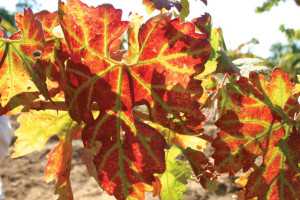 Golino was asked by one grower if it’s possible to take matters in his own hands in getting rid of red blotch. Golino said she’s seen it done.

“I’ve worked with growers who’ve rogued out viruses, and from then on used only their own scion wood, sourcing rootstock from a source they have complete confidence in,” she said.

Because the problem is so potentially devastating, a lot more money has rolled in to fund research. Golino said there are five groups of entomologists, plant pathologists — not just individuals — working on finding an answer. Among their research goals is to find out why red blotch spreads in once case, and doesn’t in others. Insects have often been found to be vectors in the path, as mealybugs are for leafroll.

“We are frantically screening leafhoppers for a vector of the disease,” she said.

One reason researchers are looking at insects as the potential vector is because of the way it spreads. In the old UC-Davis vineyard, the Classic Foundation Vineyard, only nine vines had red blotch out of the thousands tested in the blocks. What’s odd is that in clones side by side, one vine would have it and one would not. There’s also the fact that no grapevine virus has been found to be mechanically transported.

“Two vines are side by side for 25 years, and one has a virus and does not? If it were mechanically transported, how do you explain that?”

Other Words
There was an impressive roster of speakers at UC-Davis’ recent “An In-Depth Look At Red Leaf Viruses.” Here’s a brief sampling of what they had to say.

Meet the Latest Apple Grower of the Year Award Winner