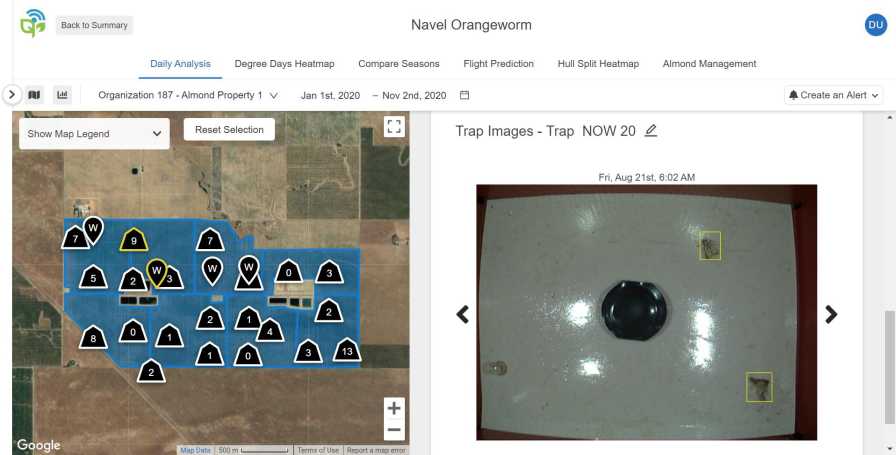 If you really want to understand the value of automatic, or “intelligent,” pest traps, Allen Fetters says you should consider how it goes today for the average nut grower.

Say the grower gets a Thursday trap count from his pest control adviser showing a lot of pests were caught, says Fetters, the Principal at AGceleration, a consulting service in Bakersfield, CA, specializing in agricultural technology and innovations.

“But those pests in the trap — did I catch them Wednesday night, or was it last Friday? If it was last Friday, you could be seven days behind when most moths were caught in the trap,” he says. “Having that knowledge of just when those moths were coming in is critical in making pesticide applications.”

Real-time knowledge and awareness of what’s happening in your orchard is critical, and with the typical, manual trapping system you’re getting that information just weekly. With automatic trapping, you’re getting it every day — or even more often if you really want it — so it helps enable you to finely tune when that peak flight will occur so you can properly time your insect applications.

“Remote sensing of pests really comes into play in knowing when the pest flight is occurring,” says Fetters. “Especially in utilizing IPM (integrated pest management), because with softer chemistries, timing is much more critical, and this allows you to get the right timing. You’re going to need solutions like this to hone in on how much you really need to spray.”

“In walnuts, telemetry is the biggest issue, because the canopies are so large and dense it is tough to get signal out,” he says. “We have tried going below the canopy, and that works relatively well. But it’s just tougher to deploy in walnuts than it is in almonds or pistachios and some other crops.”

Automatic traps appear similar to standard delta and wing traps, and also include pheromone attractants, but they are outfitted with cameras and GPS (global positioning systems), along with various sensors, depending on the manufacturer. There are basically three such companies involved: DTN, Trapview, and Semios.

The company refers to its automatic trap as the Smart Trap, says Ken Schweickert, DTN Smart Trap Product Manager. The Smart Trap was originally developed by Spensa Technologies, which DTN acquired in 2018, and originated as a research project at Purdue University.

“It started with a USDA grant designed to automate agriculture, so it started as a labor saver,” he says. “But growers soon had another idea — that it would make them better farmers.”

Schweickert says automatic traps do that by enabling growers to make more precise decisions. Getting a daily pest count — which isn’t practical with a manual system, at least on a commercial scale — is absolutely critical in order to better time sprays.

“It may even save you a spray, but timing sprays to improve efficacy for better yield is the big one.”

The grower can simply whip out his phone and see not only how many insects arrived during a given period but also pictures of them. He can also graph the results over time.

The DTN Platform has other functionalities, a suite of services that you can upgrade to, from geotagging scouting trips to accessing phenology models, and is marketed on a subscription model.

Trapview was founded in 2009 in Slovenia. Allen Schoneman, General Manager, Trapview North America says, and now Trapview can be used on 50-plus pests in more than 30 countries. The key advantage is the advanced notice it provides growers as to when a pest will peak, because most pesticides are simply applied at the wrong time.

“On average, pesticides are only 10% effective; they are sprayed too late or too early,” Schoneman says. “Our system helps you time that better and save money because you only spray when you really need it. Also, perhaps you don’t need to spray the whole area, maybe only one of four fields or only the north quadrant of one particular field.”

In addition, the nature of pesticides has changed as they have become softer on the environment, meaning growers have to be even more precise in their applications, Schoneman says.

One advantage of Trapview is they employ a self-cleaning trap, adding a motor and large roll of sticky paper and take-up roll. Instead of changing a sticky trap manually every week — a lot of big moths, such as NOW, can fill a trap in a couple of days, sometimes even hours — if it looks full on camera, you can just remotely advance it.

Semios took a different approach to automatic trapping, says the company’s Director of Sales and Marketing, James Watson, in that the company incorporated it into its variable rate mating disruption system.

“Our philosophy is the climate inside that orchard is what drives that insect behavior, so weather stations, traps, everything must be connected,” he says. “We make decisions on pheromone release based on the trap catch and, most importantly, degree days directly from within the orchard – we use trap data to confirm pheromone release schedules and the grower’s PCA can use it for recommendations.”

Semios has the largest deployment of traps globally, with a total of 8,000 network traps which have taken 5 million images since 2015, counting 530,000 insects in that time. But Watson says generic, multi-species trapping just tells you what pests are in the area so their approach is to have a trap dedicated to a specific pest, such as NOW, so you can track flight phenology. Then they take that data and collaborate with the grower/PCA for things like spray timing.

“If you can profile the flight information and match it with the progress of the crop, like almond hull split, you can better time applications and possibly save money or reduce damage,” he says. “We do it all, including installation and lure/liner changes, as well as track everything remotely; we’re trying to offset the impact on labor because we frequently hear that is a grower’s biggest problem.”

For almond and pistachio growers, Watson says Semios has assembled the biggest, most comprehensive database on NOW of any company. “So the PCA and the grower they’re working with have the best information in real time, to make the best decision, and it’s all automated,” he says. “Trapping is just one piece of a much bigger puzzle.”