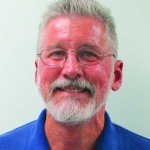 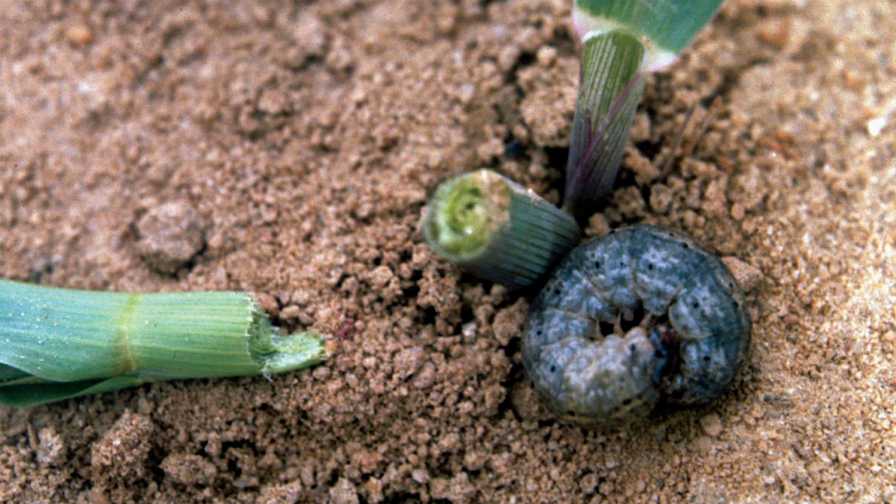 Black cutworm (Agrotis ipsilon Hufnagel) is found throughout the world, attacking nearly all vegetables. This species also feeds on a variety of agronomic crops. Larvae persist throughout the winter in Florida. Photo by W.M. Huntsbarger

Black cutworm larvae are uniformly colored on the upper surfaces, ranging from light gray or gray-brown to nearly black. Close examination reveals numerous dark, coarse granules over most of the body. The head is brownish with numerous dark spots.

The adult is a large moth with a half-inch wingspan. The forewing is dark brown marked with a lighter irregular band and a small black dash that extends from a bean-shaped wing spot. The hind wings are whitish to gray.

Moths usually lay eggs on low-growing, broadleaf plants but may deposit eggs on dead plant material. The eggs are deposited in clusters on foliage. Females may deposit 1,200 to 1,900 eggs.

There are commonly six to seven instars. Larval development is influenced by temperature, and the number of generations occurring annually varies with weather conditions. Larvae usually remain on the plant until the fourth instar, when they become photo-negative and hide in the soil during the daylight hours. In the latter instars, cutworms often sever plants at the soil surface, pulling the plant tissue below ground. Pupation occurs below ground.

The black cutworm prefers feeding at soil level. Larvae can consume more than 400 square centimeters of foliage during their development, but more than 80% of this occurs during the terminal instar. Thus, little foliage loss occurs during the early stages of development. Once the fourth instar is attained, larvae can do considerable damage by severing young plants. A single larva may cut several plants in a single night.

Black cutworm populations tend to be higher in wet areas of fields and in fields that have been flooded, earning it the nickname “overflow worm.”

Adults can disperse over long distances moving north in the spring and south in the autumn. Studies have demonstrated long distance movement of moths in the range of more than 600 miles in two to four days when assisted by northward flowing wind.

Various wasps, flies, and predaceous ground-dwelling insects such as ground beetles parasitize, or feed, on larvae, but data on their relative importance is scarce.

Adult populations can be monitored with blacklight and sex pheromone traps. Pheromone traps are more effective during the spring flight when larvae present the greatest threat to young plants.

Large larvae burrow in the soil and are difficult to observe. Larvae can be effectively sampled with bait traps prior to emergence or planting of seedlings.

Black cutworm larvae feed preferentially on weeds, and destruction of weeds can force larvae to feed exclusively on crop plants, exacerbating damage. It is often recommended to not destroy weeds until larvae approach maturity.

Gene McAvoy is the Associate Director of Stakeholder Relations for the UF/IFAS Southwest Florida Research and Education Center in Immokalee, FL. See all author stories here.