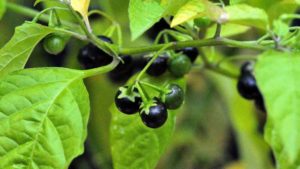 Welcome to American Vegetable Grower® magazine’s field scouting guide. This month’s guide concentrates on Solanum ptycanthum (eastern black nightshade). Each month, we will bring you a different pest or pathogen, rang-ing from weeds and diseases to insects and even wildlife. We reached out to pathologists to learn how to spot and treat this disease. This month, our contributor is Dwight Lingen-felter of Penn State University Extension.

Crops affected: Many crops are impacted, but it is most problematic with crops in the Solanaceae family, such as peppers, tomatoes, vine crops, and pumpkins because nightshade also is a member of this plant family. The juices from eastern black nightshade berries also can seep into soybean seeds during harvest, staining the beans and reducing the overall quality of the commodity.

Lingenfelter: Eastern black nightshade is an annual. It grows year to year from seed. Any weed that has a large population can cause pressure in a plant system because it competes with the crop for resources such as sunlight and nutrients.

Based on an informal survey I conducted of county educators in horti-culture, nightshade was a nuisance for growers of peppers, tomatoes, pumpkins, and a few other crops. It can be a serious problem for some vegetable growers. On tomatoes for example, it is hard to control because there are very few products that have activity on nightshade. 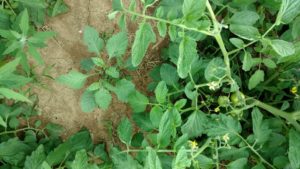 Black Nightshade can be tricky to identify when among tomatoes, its botanical cousins.

How to ID the Weed

Lingenfelter: Eastern black nightshade can be mistaken for some of the pigweed varieties, such as redroot pigweed or tumble pigweed, especially at young stages in the life cycle.

All parts of the plant are considered toxic; however, the green leaves, stems, and seeds are especially toxic. The green fruit may be quite poisonous, while the ripe fruit may be relatively nontoxic; this could have an impact on fresh market crops or forages.

In most cases, chemical control or the use of herbicides is the backbone of many weed management systems. However, it is critical to include cultural and mechanical control tactics whenever possible. Obviously, some methods won’t work, and others won’t be suitable for certain settings, so select or supplement the tactics that are most appropriate.

Many herbicides that would kill nightshade would also injure the crop. The lack of effective herbicides is a key problem.

One of the problems with many traditional herbicides is that they are only labeled for certain crops or in certain parts of the country. Lingenfelter says to make sure to refer to herbicide label for speciﬁc use guidelines. Here are some typical options but others might exist.

Chateau (Valent USA)
Use: For control and suppression of certain weeds
Active Ingredient: Flumioxazin
WSSA Group: 14
Additional Info: Approximately 85-90 percent effective. Only labeled for use in some states.

How Tega Hills Farm Reinvented Itself During Lockdown

Survey: Has the Pandemic Reshaped the Vegetable Industry?