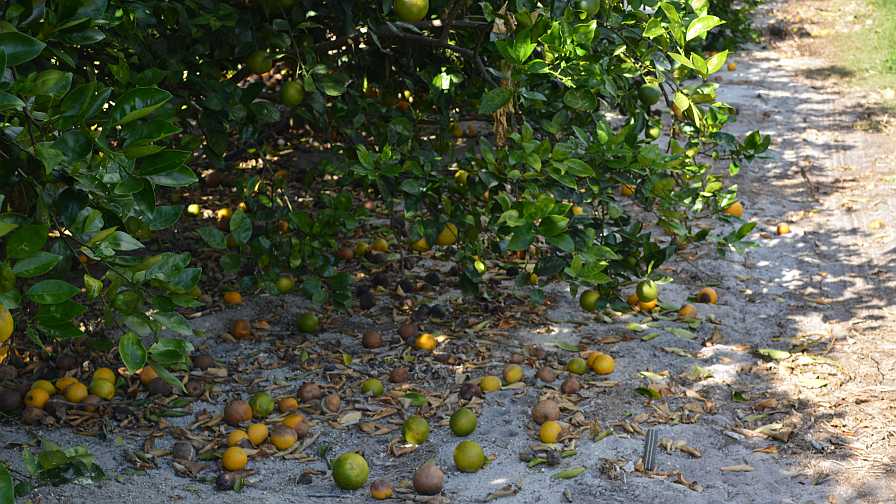 Reports of above-average citrus fruit drop is having an impact on crop estimates in Florida. Photo by Frank Giles

USDA’s outlook for Florida’s orange crop this season is picking up in the new year right where it left off with the final few estimates of 2020, looking down.

The latest numbers include a 2 million box deduction of early, mid-season varieties (Hamlin and Navel), bringing that segment down to 20 million boxes. This comes on the heels of last month’s 1 million-box slide and puts the overall number (including 34 million for Valencia) at 54 million boxes. If the current figure holds, it would be 20% less than last season’s output of 68 million boxes.

Per the report, above-average citrus fruit drop in the groves is contributing to the falling numbers. “Final droppage of non-Valencia oranges (excluding Navels) at 43% is above the maximum, and the highest in a series dating back to the 1960-1961 season,” forecasters note.

According to recent research from UF/IFAS, about 10% to 15% of citrus fruit drops from a healthy tree on a normal basis. The pressure of citrus greening (HLB) ups the chance for drop though. In the 2012-2013 season, researchers and citrus growers reported about 25% of crop loss because of greening-associated fruit drop. Now, depending on the citrus variety, growers may see a pre-harvest drop up to 50%.

On a more positive note, a modest bump in grapefruit production over last month also was included in USDA’s latest forecast. The 200,000-box increase raises the overall total to 4.6 million boxes, which is still about 5% less than last season’s final tally.

Florida Department of Citrus Executive Director Shannon Shepp weighed in on the latest USDA estimate with a glass-half-full attitude. “While a decline in production is never welcome news, there is positivity to be found elsewhere in the industry,” she says. “Grapefruit production is up, growers continue to make great strides against citrus greening, and consumers are more focused on health and wellness than ever before.”

USDA is slated to release its next citrus crop estimate on Feb. 9.

How Science Is Helping Sweeten the Deal for Sweet Corn

The COVID-19 Impact on Vegetable Plantings in 2020