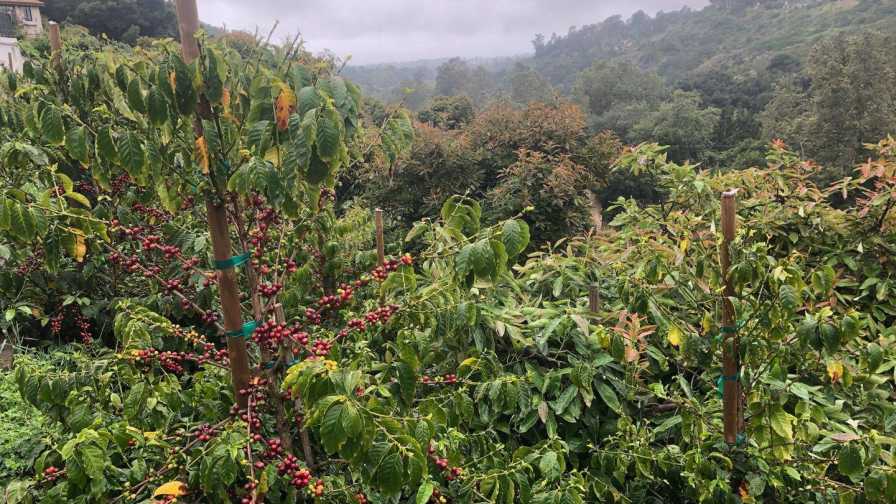 Fresh coffee from California? These coffee plants are growing successfully in the hills of Santa Barbara.
Photo courtesy of Frinj Coffee

Without a doubt, coffee is one of the most consumed beverages on the planet. Estimates indicate well more than 2 billion cups are downed every day. The plants that provide coffee beans typically thrive in the tropical climates of Guatemala, Costa Rica, Colombia, Brazil, Hawaii, and Indonesia. But what about California? Jay Ruskey, a farmer, agronomist as well as President and CEO of Goleta, CA-based Frinj Coffee is proving that coffee can flourish in the coastal pockets of the Golden State, too.

After a dozen years of research with the Coffee Center at University of California, Davis, Ruskey introduced the premium Frinj Coffee brand in 2017, which is grown at his family-owned and operated Good Land Organics farm just north of Santa Barbara.

Frinj Coffee has since developed a “whole systems solution” to coffee production and is working with 60 farms in Central and Southern California, who are currently growing its coffee. Ruskey sees plenty of return on investment for the California farmer as the specialty coffee market is valued at $125 billion and predicted to double in the coming years.

Lemon Ridge Ranch Owners Lance and Susan Frautschi started growing premium Frinj Coffee on their family-owned and operated farm in Somis, CA about four years ago. They were looking for a viable crop alternative to lemons, which are vulnerable to HLB — aka, citrus greening disease. They think California could be the next Kona or Costa Rica when it comes to coffee production.

“We were among the first farmers to grow Frinj Coffee in Ventura County,” Lance notes. “And while it comes with more risk than other crops — like berries, for example — coffee is exciting and energizing, and a labor of love. The plants are fragile in the beginning, but they become robust in 3 to 4 years as they adapt to the sun and the environment. Once you get through that initial stage, they can grow for 50 years.”

3 3 5 Can Coffee Grow to be Next Cash Crop in California?