The CRISPR/CAS9 (clustered regularly interspaced short palindromic [DNA] repeats /CRISPR associated-protein9) system was originally discovered as a bacterial immune mechanism that can fend off the invasion of bacteriophage, a class of virus capable of infecting and killing bacteria.

The CAS9 protein is a nuclease that functions like a DNA scissor. The CRISPR sequences help recognize the DNA of invading bacteriophage and guide CAS9 to chop it off. In the natural settings, genes encoding both CRISPR RNA sequences and CAS proteins are diverse, comprising numerous members.

Ever since it was repurposed for programmable changes of genomic DNA, the CRISPR/CAS9 system has become the workhorse in gene editing for a wide range of applications in animals and plants, including the improvement of fruit crops.

To date, the system has been improved tremendously, making genome editing a process equivalent to “search and replace” in a computer word-processing program.

However, a major technical bottleneck remains in the CRISPR/CAS9-based genome editing. That is, the large size of its molecular machinery frequently poses a challenge for cell delivery. Moreover, a short, anchor-like sequence, called protospacer adjacent motifs (PAMs), must be present next to the target region, restricting the genome site accessibility.

Fortunately, the bottleneck is about to be removed, thanks to the latest discovery of CRISPR-CasΦ (Phi), a compact CRISPR/CAS system requiring minimal anchor sequences in a target region. 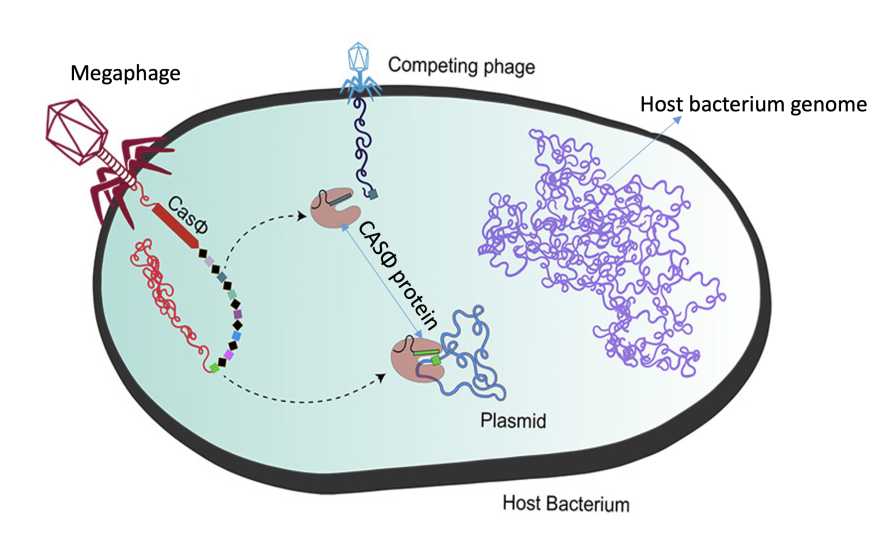 Schematic representation of a CRISPR/CasΦ carrying megaphage infecting a bacterium. The hypothesized CasΦ proteins work to eliminate competing phages and the other DNA element (plasmid) entered into the cell.
Graphic adapted from Pausch et al 2020, Science 369: 333-337

Distinctive from the commonly known bacterial CRISPR/CAS9 system, CRISPR/CasΦ was uncovered from certain bacteriophages of a large genome, called huge bacteriophages, or megaphages.

The discovery of the megaphage-originated CRISPR/CasΦ was reported in a latest study led by Professor Jillian Banfield at University of California (UC), Berkeley (Al-Shayeb, et al. 2020 Nature 578: 425-431), in which a large number of DNA samples directly recovered from environmental samples across the globe were sequenced and analyzed.

A most important feature of the CRISPR/CasΦ system is its small molecular size, equivalent to only one-half of that of CRISPR/CAS9.

However, could the phage CRISPR/CasΦ system be engineered into a genome-editing tool comparable to the CRISPR/Cas9 system?

The answer seems to be yes, based on a follow-up study led by Dr. Jennifer Doudna, who is also a professor at UC Berkeley.

This follow-up study revealed that CRISPR/CasΦ was capable of cutting double-stranded DNA, and its requirement for an anchor-like sequence in the target region was much less stringent than that of CRISPR/CAS9.

More excitingly, CRISPR/CasΦ could also be reprogramed to edit genomic DNA in human cells with an efficiency comparable to that of CRISPR/CAS9. When tested in plant cells, the CRISPR/CasΦ system similarly showed the expected gene-editing activities.

For megaphages, carrying such a CRISPR/CAS system is of biological significance, as it helps them to compete with other bacterial phages (see Figure 1) and to cope with the bacterial host immune systems to win their “arm race.”

For genome editing, the smaller CRISPR/CasΦ system is of critical advantages over the CRISPR/CAS9 system in cell delivery. If using existing cell delivery vehicles, CRISPR/CasΦ would allow much more cargo room for other components.

More importantly, the smaller size of the CRISPR/CasΦ system also makes it possible to use the disarmed plant virus-based delivery vehicles of much limited cargo capacity.

The disarmed plant virus-based delivery vehicles are particularly desirable for gene editing in perennial tree fruits, such as apples. This is because the virus-derived vehicles could help generate edited plants free of any transgenes. Since such gene-edited plants are essentially the same as the original mother plants, their original identity and brand recognition would be maintained.

There is no doubt that the compact CRISPR/CasΦ system represents an important new arsenal in the genome editing toolbox. However, much more dedicated studies are needed to learn more about its basic properties.

Currently, the off-target effect of the CRISPR/CasΦ system remains unclear. There are also no reported studies on the CasΦ variants.

Based on the knowledge and experience from CAS9, engineering CasΦ into variants of improved and expanded gene-editing capacities will be a major focus in the future.