One of the great challenges for optimizing cherry tree training in an orchard context is the fact that, in nature, sweet cherry is a forest tree species. While I’d long known this, last spring it was especially evident as I drove Michigan’s nearly deserted highways under COVID lockdown to some of my research trials two hours from the Michigan State University campus.

Instead of focusing on the usual 75 mph tractor-trailer rigs and other traffic, I could scan the forests adjoining the highway and was amazed at the number of towering trees with beautiful white blossoms interspersed among the stately oaks, maples, and cottonwoods — sweet cherries! 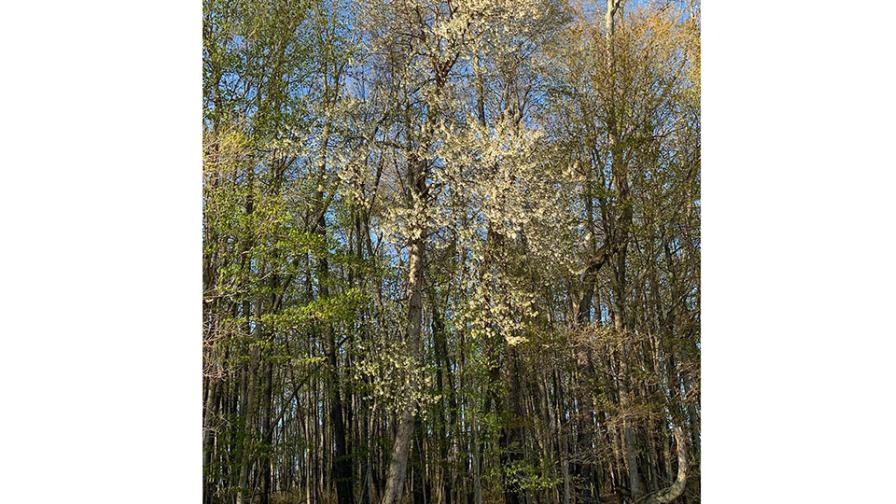 In the temperate zone tree fruit world of battling unwanted vigor and problematic growth habits, sweet cherries are unsurpassed. In nature, peaches, plums, and apricots may grow to be 25 feet tall; these are pioneer species, the trees that begin to colonize previously open fields and meadows before eventually giving way to forest species. Indeed, peach is one of the earliest invasive species in North America, brought by the Spaniards in the 1500s. It naturalized so quickly and extensively that the early settlers in the English colonies assumed peaches were native to North America. They grow fast but not so tall.

Apples and pears are intermediates between pioneer and forest species, able to grow to maximum heights of about 40 and 60 feet tall, respectively. The tallest specimens of those two species could be stacked on top of each other and still not reach the documented height of one sweet cherry tree found in a forest in France that reached 127 feet tall! So, what does this mean for cherry orchardists?

REACHING FOR THE SKY

First, it means that sweet cherry evolved with a genetic growth habit over the centuries to compete successfully in tall forests. Physiologically, cherries exhibit apical dominance and acrotonic vigor. Apical dominance means that as the tip (or apex) of the tree leader grows, it inhibits the buds below it from growing out into new shoots. This lets the tree allocate the majority of its resources for growth — carbon, nitrogen, etc., — for extending its highest structural point, reaching for the light available in the highly competitive mixed forest canopy. This is also why it can be a challenge for growers to develop a desirable array of lateral shoots uniformly along the leader in their orchard setting. Such growth would detract from forest survival.

Acrotonic vigor means the greatest vigor is directed to the growing points in the top of the tree. Each year, as the leader apex begins to continue its extension, it allows the buds just below it (that formed the previous year) to grow out into a limited number of lateral shoots. The few that are closest to the extending leader grow the most vigorously, at very acute angles such that they can almost rival the leader’s extension. These are back-up leaders — in case the leader gets damaged, one or two can assume the new role of the leader, reaching for the available light.

Any lower lateral shoots that escape the apical dominance of the growing leader will develop at flatter angles, thereby able to capture some of the sunlight not intercepted by the leaves on the leader, and concomitantly increasing the shade below them that can slow the growth of any nearby competitors.

Another interesting evolutionary trait is how leaves form on the leader as it grows. After the first leaf forms, the second leaf forms a little higher and at an angle of 137.5 degrees away from the first leaf. The third leaf forms 137.5 degrees away from the second, a little higher yet. These angles mean each leaf expands as far away as possible from both its predecessor and its successor in leaf development on the growing shoot, resulting in what is known in mathematics as a Fibonacci arrangement, with 137.5 degrees known as the Golden Angle. This leaf arrangement provides the most efficient capture of light and minimization of self-shading for the leaves on a vertically growing leader. 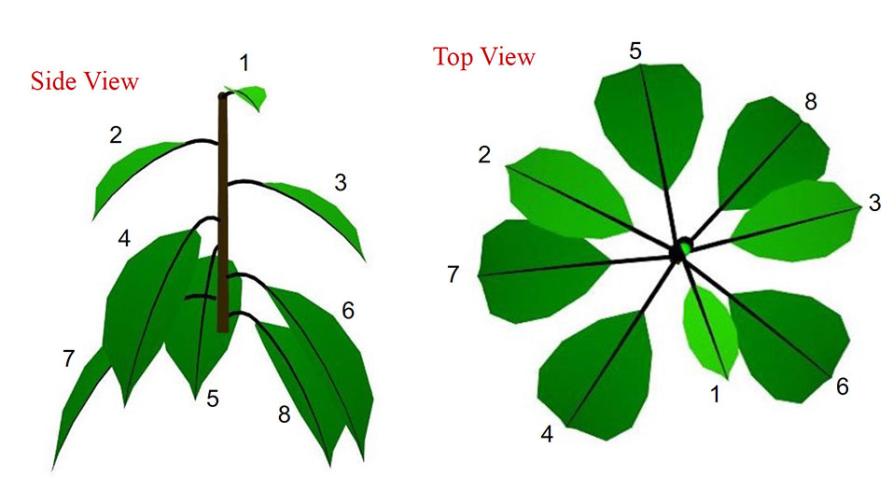 So, a vertically growing cherry leader captures light as efficiently as possible as it extends, prioritizing nutrient and photosynthetic resources for its continued upward growth to compete successfully in the forest. When lateral shoots eventually grow out, they often follow this same Fibonacci pattern, initially capturing light very efficiently. However, as the canopy becomes more complex with maturity and the branching of the laterals below the leader, shading increases in the center of the tree, resulting in the loss of interior leaves and, importantly, fruiting sites. 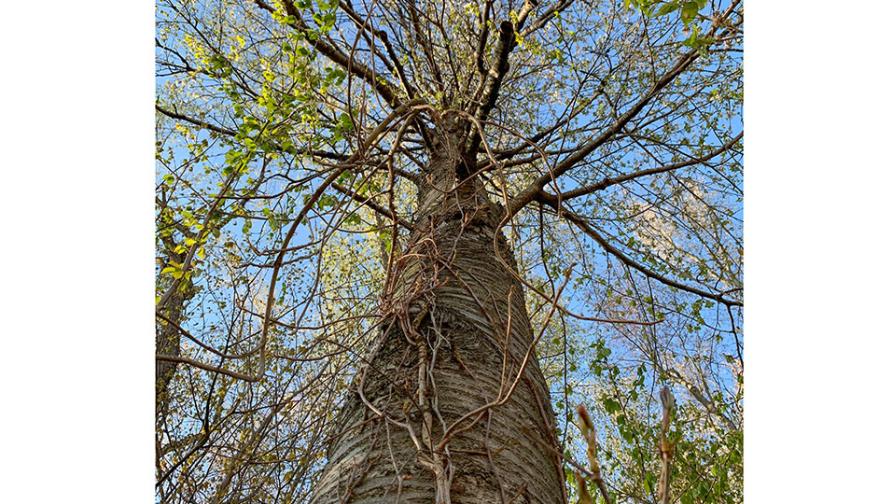 The same Fibonacci pattern on a tree.
Photo by Gregory Lang

Consequently, how do we harness these evolutionary traits to create efficient orchard production systems? The Upright Fruiting Offshoots (UFO) and Kym Green Bush (KGB) canopy architectures both are developed with multiple vertical leaders having minimal lateral branches, thereby utilizing cherry’s natural habit to grow vertically with strong apical dominance. These simplified leaders also capture light with evolutionary efficiency and, in the case of UFO, with minimal leader-to-leader shading because the canopy is arranged in a two-dimensional plane oriented north to south. Acrotonic vigor, while still inherent in the tree, is diffused among multiple leaders, creating less of a battle to manage excessive vigor at the top of the canopy, as often occurs in single leader orchard trees if their rootstocks are not sufficiently dwarfing.

And voila! Working with cherry’s evolutionary traits for success in the forest can lead to a highly light- and labor-efficient orchard tree!

Greg has been our cherry expert since 2014. He conducts research to develop and integrate knowledge about new rootstocks, varieties, environmental and developmental physiology, and orchard technologies into optimized, efficient production systems. See all author stories here.