It is an exciting time of the year when asparagus spears start poking their heads out of the ground. Careful monitoring and attention is needed to efficiently manage asparagus harvests.

Asparagus harvest starts at the end of April and usually lasts for three to four weeks depending on air temperatures. This year in Iowa due to the cool spring weather, harvests have been delayed by one to two weeks.

Spears start to emerge when the soil temperature reaches 50o F. After this, growth of asparagus is dependent on air temperature. Early in the season, 7-to-9 inch spears might be harvested every two to four days. As air temperatures increase, harvesting frequencies will increase to once or twice per day. Growers can have up to 24 harvests per season, after which crowns are allowed to fern and grow out.

There is always a debate on how to harvest asparagus: snap vs. cut. It’s important to note there are no benefits or advantages of cutting asparagus below the soil with a knife. On the contrary, this may pose risk of injury to buds on the crown that will send up new spears. Snapping a 7 to 9 inch spear slightly above the ground level is the ideal harvesting procedure. The small stub of asparagus that is left in the soil after snapping eventually dries up and disintegrates.

Timing Is Everything
It is critical to harvest asparagus at the right stage. Prolonged harvesting intervals lead to reduction in spear quality. Tips of the spears start to loosen, also known as “ferning out,” and fiber begins to develop at the base of the spears, causing them to become tough. 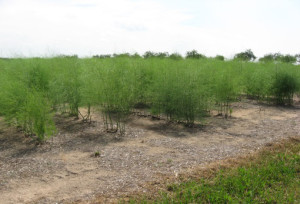 Growers should harvest all of the spears that come up until the end of the harvest period, even the small diameter ones.  If they don’t, asparagus beetles will lay their eggs in those ferns. Since the length of harvest season will vary from year-to-year depending on air temperature, harvesting should be stopped when the diameter of 75% of the spears becomes small (less than 3/8 inches).

Another indicator is the number of spears harvested. If the number of spears in a harvest drops off significantly beyond 15-16 pickings or so, you may want to consider ending harvest early.  After the end of the harvest season, the spears should be allowed to grow. A spear is really just a plant shoot, and the shoots will grow into the mature fern that recharges the crown for the next harvest season.

When harvest is finished, snap all the spears off at ground level and apply fertilizers (organic or synthetic). Also start actively managing weeds until the new spears emerge, fern out, and provide a large canopy to cover the space between the rows. Once a dense fern canopy is formed, weeds are shaded out.

Nair is in the department of Horticulture at Michigan State University.

Hail to the 2021 Apple Grower of the Year Winners

The Promise and Pitfalls of Using Managed Bumblebees for Blueberry Pollination