New research funded by the Almond Board of California (ABC) shows the water footprint of one of the state’s signature crops — or at least the one formed by trees — is considerably smaller than the figure currently bandied about.

Not only did it show dietary and economic benefits to be greater than for the water needed to produce them, the study also found the water footprint of almonds grown in California is smaller than a global average originally reported.

The latest study, “Water-Indexed Benefits and Impacts of California Almonds,” published in April in the Journal of Ecological Indicators, used modeling methods not actually in use to quantify the water footprint of almonds grown in California.

Research around water footprint is crucial to the California almond community’s sustainability journey and helping better understand opportunities for further improvement, according to Richard Waycott, Almond Board of California President and CEO.

While water footprint research serves as a great foundation for continuous improvement, it is a theoretical approach based on one number, modeling, including the maximum water needed to grow almond trees. In practice, almond farmers report using about 25% less water than models show.

Water footprints are calculated using a standard global methodology to estimate the total theoretical amount of water used to produce a product or crop — in this case, almonds.

While the water footprint calculations are useful for comparisons between different crops, they are based on theoretical models, not grower-reported data.

“The modeling is based on calculating the maximum water needed to grow almond trees,” said Gabriele Ludwig, director, ABC Sustainability and Environmental Affairs. “But in practice, almond growers generally use about 25% less water than the models show.”

Growers Committed to Saving
Through the California Almond Sustainability Program (CASP), California’s almond growers statewide report irrigating their orchards with 36 inches of water, on average, per year. By comparison, almonds’ blue water footprint calculation is based on the statewide average annual evapotranspiration (ET) for almonds: 47 acre-inches.

Put simply, green water is from precipitation, blue water is from applied or managed water sources such as irrigation, and grey water is the amount theoretically needed to dilute any pollution impacts to surface and groundwater from production processes.

“It’s the difference between a model system and how it works in real life,” says Ludwig.

Or, as Ludwig states further, it’s the difference between a measurement and a projection, a real number and one plucked from the air.

“Almond growers have shown their ongoing commitment to responsible, efficient water use through advanced practices based on scientific research,” she says. “The California almond industry began investing in research in 1982 to determine if a new irrigation method — micro-irrigation — could work in almond orchards. Today, nearly 80% of almond orchards use micro-irrigation technology, compared to the state average of 42% of farms.”

What’s amazing is how many people think it’s simply a fact that almond trees use water at the rate of one gallon equals one nut. Not true? 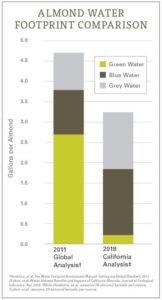 Green water, or rain water, is used far less by California growers than it is by their counterparts around the world.

“It’s complicated,” says Ludwig with an audible sigh. “It’s a complicated communications issue all caused by one Mother Jones’ article.”

That year the left-leaning magazine published the figure, which was repeated so often in so many media that many people came to think of it as simple fact.

ABC’s current estimate, also rooted in fact, is not unexpectedly much higher. But Mother Jones used only part of the data to come up with its usage projections.

“We’re struggling because (that $1 million figure) is based on just part of what’s going on,” she says. “Do you understand why this is so complicated?

How Much Water Is Best?
Based on CASP, California’s almond growers report irrigating their orchards with 36 inches of water, on average, per year. By comparison, ABC’s blue water footprint calculation is based on the statewide average annual evapotranspiration (ET) for almonds: 47 acre-inches.

Does this mean the average almond grower is using 11 inches too little water?

No, says Ludwig, many things go into this: 1) More moisture coming from deep down; 2) Times of year when growers not irrigating up to ET because of harvest and other practices, 3) Growers under-irrigating, and 4) Big debate on how much water is actually best for tree.

Ludwig thinks almond growers have been unfairly singled out because their crop gets so much attention. It has certainly been one of the great success stories in modern agriculture. Few crops have seen crop sizes grow so great while prices stay high. She looks to history for the answer.

Previous to its most recent drought, California’s last bad one was in the 1980s. One crop also was at 1 million acres back then — cotton.

1 1 5 Almonds Not All That Thirsty