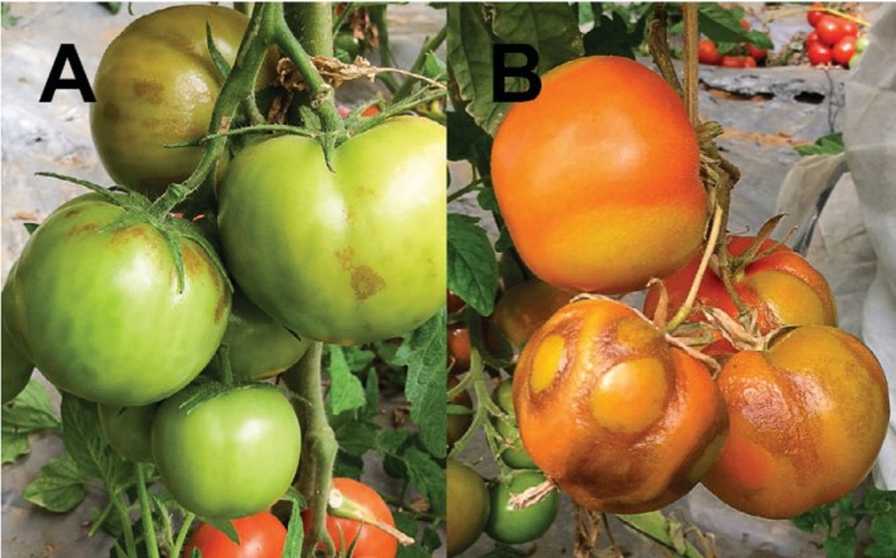 Symptoms of the ToBRFV on tomato fruit include blotched with brown necrotic spots leading to complete fruit abortion.
Photo courtesy of Seminis

The evolving and growing threat of tomato brown rugose fruit virus (ToBRFV) is moving USDA officials to amend a Federal Order regarding the malady. Specifically, the agency’s Animal and Plant Health Inspection Service (APHIS) is now adding restrictions for tomato and pepper imports from the Dominican Republic, France, and Spain.

APHIS has detected ToBRFV in tomato fruit imported from the Dominican Republic and received official reports of the disease in France and Spain. In addition, APHIS is removing a reference to obscured seed in the Federal Order to clarify that obscured tomato and pepper seed remain eligible for importation into the U.S. under the obscured seed program. All other requirements in the original version of the Federal Order submitted Nov. 15, 2019 are unchanged.

The disease caused by ToBRFV was first reported in 2014 in tomatoes in Israel. Since then, it has been reported multiple areas around Europe, the Middle East, and North America. The virus was detected and eradicated from a California tomato greenhouse in 2018. Last fall, plant inspectors in Florida intercepted the ToBRFV tobamovirus from packaged Mexican tomatoes in two separate locations.

Tomato and pepper are the two main hosts. Symptoms caused by ToBRFV include bubbling and mosaic patterns on leaves of susceptible pepper, and fern leaf and mosaic patterns on tomato leaves. On fruit, symptoms include smaller fruit size with a rough surface, fruit drop, delay in ripening, and fruit discoloration including blotching, pale color and/or brown necrotic spots. Infected tomato fruits can be unmarketable or reduced in quality. Necrosis can occur on susceptible pepper fruit.

To continue to safeguard against the introduction of ToBRFV into the U.S., APHIS will continue to restrict the importation of tomato and pepper by requiring imported plants and plant products to be free of evidence of ToBRFV, as specified in the Federal Order.

Propagative hosts are considered high risk pathways for the introduction of ToBRFV and under the conditions of the Federal Order, imports of propagative material must be free from ToBRFV based on origination from an area free of the pest or negative results of diagnostic testing.

Did Earth Just Score Its Hottest Year on Record?